I am quitting acting – Ramsey Nouah 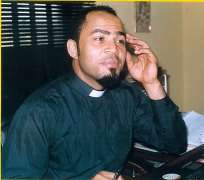 Tracking down this 'Nollywood' A-lister was an experience in itself, so much so that by the time I got to meet him, I felt like a soldier who had survived a very long and arduous campaign. The journey coupled with leads from e-mails, text messages and phone calls to well-known industry contacts, finally took me to the ancient city of Ibadan in Oyo state where he was in the process of shooting an epic movie.

However, because we were pressed for time, the following interview was not as all encompassing as i had hope but i had extracted a promise for him for a sequel. In this interview which revealed Ramsey as one who is very guarded about his privacy, the award winning actor talks about the industry, his humble beginnings and projection for the future after 'Nollywood'. Enjoy…

How would you assess the industry now, after almost 20 years on the scene?

In the beginning, nobody knew that it was going to be this big. Back then, when we started off, we had good content, storyline, production, and acting. You would actually think that with time it would get better, but unfortunately there are so many obstacles with anything good. The changes in policy [and in] government, etc has affected the industry. Also there was a huge break out of piracy, which of course affected it adversely.

How have the lack of effective regulatory bodies affected the industry?

Regulatory bodies are needed in any industry in the world, not just in film. Indeed, we do not have that, and you can blame that on many factors. It is a chain reaction that's affecting us on many fronts. Our guilds, for instance, are not very effective in making these things work. Also, we are not unified; there is no unity among most of the actors, unlike in the music sector. If we all come together as one and find a unifying front, we will make it happen.

How true is it that some film makers have become more determined to make good movies?

Everybody is talking about having fantastic productions. For instance, here in Ibadan, we are shooting a very strong movie about the assassination of Murtala Mohammed, [which] is a very sensitive issue. We've been planning this since 2001, but we didn't get permission from the military, which stalled it. However, we finally have the approval and we are getting on board. A very good movie will stand the test of time, the type we can keep in the archives and people will refer to it later and commend it. The type my grand-children will see and [say] 'yeah that's my granddad, they revolutionised the industry'.

Did you model yourself after any particular actor when starting out?

Not exactly. When I got into acting, there was nobody to really model myself after, I mean I grew up with the likes of Arnold Schwarzenegger, Sylvester Stallone. But you know we don't do action films, so I couldn't possibly tell you that I was looking up to these actors.

What about others like al pacino, robert de niro…

Well, I wasn't privy to those films at the time. I grew up not having a lot. Television was like a huge luxury at the time. It was when I bumped into people watching movies outside that I got the opportunity to see some films. James Bond was one of the very popular ones at the time. But I didn't even think I was going to act. Back then, most of the people who were acting in Nigeria were Theatre arts graduates or students who were fantastic actors. Before then, there were soaps like 'Ripples', 'Checkmate' and the like. It was after I got into acting that I could actually say 'Oh yeah, I like Al Pacino'.

At what point did you realize you were no longer a 'regular' guy?

After 'Fortunes', people, when they saw me would go wild and start calling me 'Jeff Akin Thomas', which was the character I played on 'Fortunes'. I used to get upset, and I couldn't handle it. I didn't know that that was what followed fame, but I didn't understand it at the time, I didn't understand what it was to be famous.

Was it because you were a recluse?

No, on the contrary, I was the boisterous type. It 's just that I didn't have the privilege of seeing the things of life from an early age because I grew up not having [a lot], and for me, it's a fantastic balance because it made me grounded and focused. But I like that, [because] seeing both sides of the coin has helped me.

How has your experience helped in your kids upbringing?

It's about personal training. Of course I wouldn't want a situation where I wouldn't be able to provide for my kid, but I wouldn't just provide everything he asks for, because it would be silly for me to just let him have anything he wants at his beck and call.

What if your kid wants to go into acting?

I don't have any reservations about that. I'm a very free and liberal minded person. But I wouldn't really want them to go into the movie industry.

Well, to me, there is only one movie industry, and that is the Nigerian one. That's my opinion, of course, because I know a whole lot of people are targeting Hollywood. But for me, I'm not keen on getting into Hollywood. I'm of the opinion that 'Nollywood' will get to a point where it will be very big sometime soon. Don't forget, most of the people targeting Hollywood are doing so because of the pay, and then maybe the fame on a much bigger stage. For me, however, I think the fame I already have on the platform of 'Nollywood' suffices.

Are you quitting acting?

I think I've had my fair share. To my fans and loved ones, I know they'll always want to see me on screen, but as they say, it's best to leave when the ovation is loudest. I want to leave a very strong legacy. I believe I have left a very strong imprint in that line. There's no possible way you can mention 'Nollywood' without mentioning Ramsey Nouah.

So what's next for you?

Well, I'll be going behind the scenes. I'll still be acting a bit here and there, but it will phase out for directing eventually. For a while now, I've not really been on the screen, and that's because I don't want to act just because I want to be on TV. I only want to be associated with the kind of movies that are poised to take the industry to another level, which is were we are headed now. Plus, I want to focus on working behind the scenes.

How do you find time to unwind?

Well, I don't normally get to have that family time which I really crave, and when I do take my family on vacation, it usually turns out not to be the way I had hoped. Sometimes, you're just relaxing with family in a nice, quiet place, and next thing you know, someone wants to have a picture with you. I kindly tell them 'if I oblige you, I can't turn the other down, so it's best not to start at all.' Then of course you know Nigerians, they are quick to jump to conclusions, and say you're not being considerate and all. It has to be about them all the time, and once it doesn't favour them, it becomes an issue.

Is that why people think you are snobbish?

Yeah. But you can't please everybody. Being a star or role model doesn't mean I'm not human too. I'm not Jesus Christ, I'm a human being like everybody else, I have blood flowing in my veins. Some people however don't understand it, it's only what they want that counts, not what you want.

Why do you rarely attend red carpet events?

I consciously hide away. I also hardly grant interviews, except to renowned and dignified media channels; the types that don't carry stories just to sell their paper. I try as much as possible to avoid public events, and that has helped me keep my head above water over time.

What else will you be doing once you step away from the screen?

Humanitarian activities and charitable ventures. I started a project at one point in time, but due to circumstances I wasn't able to see it through, so it didn't see the light of day, but I'm working on that now and getting the resources together. Like I said, I grew up not having much, so I know the pains. Sometimes you want to help, but greedy people hijack it and in the end, the people who really need the help don't get it.