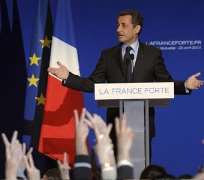 French President Nicolas Sarkozy ruled out any alliance with the far-right National Front of Marine Le Pen, backed by one in five voters in the first round of the presidential election, that would give it cabinet jobs or seats in parliament.

An opinion poll this week showed two-thirds of Sarkozy supporters want his conservative UMP party to break with past policy and strike a deal with the Front after Le Pen's 17.9 percent score on Sunday made her 6.4 million backers key to the May 6 presidential election runoff.

"There will be no pact with the National Front," Sarkozy told France Info radio on Wednesday, saying the parties disagreed on too many issues to imagine far-right ministers in government.

Trailing Socialist Francois Hollande by 8-10 points in voting intentions for the runoff, Sarkozy used a campaign rally in the eastern Alsace region, a right-wing stronghold, to appeal to National Front voters citing the values of "the France that works", family, Christianity and patriotism.

He also said he would call a referendum if re-elected to adopt a balanced budget rule if the Socialist-led Senate refused to ratify a European treaty on fiscal discipline, which Hollande has vowed to renegotiate to add measures to promote growth.

Winning over Le Pen voters is the chief headache for Sarkozy and Hollande, with parliamentary elections looming in June in which the far-right hopes to upset the mainstream and win seats.

Sarkozy, the first sitting president to lose the first round of a re-election vote, is being punished for economic malaise, nearly 10 percent unemployment and a brash personal style.

With only 10 days to turn public opinion in his favor, he vowed to further toughen a crackdown on immigration and combat industrial off shoring in response to the Le Pen vote.

His government also said it would oppose any increase in the European Union budget after the executive European Commission proposed a 6.3 percent rise next year.

Sarkozy sought to differentiate between Le Pen, who advocates France abandoning the euro currency and closing its borders to some imports, and her electors.

"There will be no National Front ministers, but I refuse to demonize men and women who in voting for Marine Le Pen cast a crisis vote, a vote of anger, a vote of suffering and a vote of despair," he said. "I have to listen to their message and take them into account, and not think it's time to hold my nose."

EYES ON PARLIAMENT VOTE
The National Front has barely been in parliament since 1988, when a change in the voting system ended its 35-seat bloc. It briefly won a single seat in 1997. Le Pen is now determined to break through with several seats in June.

Based on Sunday's vote, the party could reach the second-round in up to 345 constituencies in which more than 12.5 percent of registered voters voted for Le Pen. That is more than half the lower chamber's 577 seats and could decimate the UMP by splitting the right-wing vote.

National Front Vice-President Louis Alliot urged Sarkozy to clarify what recommendation he would give UMP voters in the parliamentary election if there were a runoff between the Socialist Party and the far right.

Former sports minister Chantal Jouanno, a UMP senator, sparked anger among party leaders on Tuesday when she said she would vote Socialist in such a case. Interior Minister Claude Gueant also said he could not vote National Front.

Hollande told France 2 television he would not make concessions to the far right but he did want to show he had understood voters' fear and anger about factory closures.

The Socialist said if elected, he would try to prevent a series of industrial layoffs which he said were being deliberately held back until after the election.

"I hear the anger. I see the workers who are wondering about the future of their jobs, who are fighting against outsourcing, who do not accept the redundancy plans, who express their anger by voting for Marine Le Pen," Hollande said.

"Regarding redundancy plans, I want us to have measures that can protect and reinforce our industry," he said, without going into detail. "I will not allow this string of closures, that has been put off until after the election, to take place."

Sarkozy made his own gesture to factory workers by saying it was important to realize the impact of the financial crisis was much harsher for them than those in secure civil servant jobs.

Sarkozy and Hollande battled for the blue-collar worker vote in their election campaign, but opinion polls show many in that group flocked instead to either the far right or hard left.