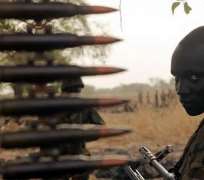 South Sudan accused Sudan on Tuesday of mounting bombing raids on the newly independent country's oil-producing border region and President Salva Kiir said the latest hostilities amounted to a declaration of a war by his northern neighbor.

Weeks of cross-border fighting between the former civil war foes have threatened to escalate into a full blown conflict in a region that holds one of Africa's most significant oil reserves.

Although both Sudan, ruled by President Omar al-Bashir since 1989, and South Sudan, which became independent last July under a peace deal with Khartoum, can ill-afford a protracted war, both countries have fuelled tensions with bellicose rhetoric.

The United States, China and Britain urged both sides to return to the negotiating table.

Sudan's foreign minister said he was ready to discuss security issues with the South.

Philip Aguer, spokesman for South Sudan's army, or the SPLA, said Sudanese Antonov aircraft had flown up to 40 km (25 miles) into South Sudan's territory to bomb the settlements of Teschween, Panakuach and Roliaq on Monday night. Taban Deng Gai, governor of Unity State where the raids occurred, said bombs had hit Lalop market and Panakuach.

The raids came after the SPLA said Sudan bombed a market early on Monday near the oil town of Bentiu, capital of Unity state, and killed two civilians, an attack they said amounted to a declaration of war. The United Nations condemned the attack.

The Sudanese army denied carrying out air strikes.
CHINA URGEST RESTRAINT
Speaking in China, which has significant oil and business interests in both African countries, Kiir said Sudan had declared on his country.

"It (this visit) comes at a very critical moment for the Republic of South Sudan because our neighbor in Khartoum has declared war on the Sudan," he told Chinese President Hu Jintao.

Hu called for restraint, urging the two neighbors to settle their disputes peacefully.

In addition to halting nearly all oil production, the recent fighting has displaced some 35,0000 people in areas around Heglig, Talodi and other parts of South Kordofan, the U.N. Refugee Agency said, citing its local partners.

"The urgent task is to actively cooperate with the mediation efforts of the international community and halt armed conflict in the border areas," China's state television paraphrased Hu as telling Kiir.

South Sudan said on Friday it would withdrew from the disputed Heglig oilfield it seized earlier this month, bowing to demands from the U.N. Security Council.

The SPLA's withdrawal from the oilfield, which used to produce about half of Sudan's total oil output, reduced the risk of an all-out war but Juba has accused Khartoum of daily air bombardments on its territories since then.

"We have not declared war but the SPLA is on maximum alert because if they attack they will not (catch) the SPLA off guard, Aguer told reporters in Juba.

"If they don't stop bombardment, if they don't stop the incursion into our territories, I assure you the SPLA is capable of retaking all of these areas that they are occupying by force," he said.

But the two territories have yet to settle a long list of disputes including the position of their shared border, the ownership of critical territories and how much the landlocked South should pay in oil transit fees to Sudan.

For China, the standoff shows how its economic expansion abroad has at times forced Beijing to deal with distant quarrels it would like to avoid.

A South Sudanese official, deputy chief of protocol Gum Bol Noah, said China had agreed to provide technical assistance on an alternative oil pipeline to Kenya, but would wait until the situation was calmer.

Juba has said it wants to build a pipeline within one year to end its dependency on Sudan's oil transit and export facilities, but experts say the project is not viable without significant new oil discoveries.

Bashir has ruled out a return to negotiations with Juba, saying the South's government only understands "the language of guns".

But Sudanese Foreign Minister Ali Karti said Khartoum was ready to negotiate with the South on "security issues".

"I'm now ready to talk, but on the security issues," Karti told reporters in Addis Ababa after meeting officials from the African Union, who have urged both sides to return to talks.

South Sudan Information Minister Barnaba Marial Benjamin said Kiir's visit to China was intended to improve relations that were strained after Juba expelled the head of a China-led oil consortium it accused of helping Sudan to "steal" southern oil.

"The relations we have been having with them (China), with Khartoum on the other side, have not been clear," he told reporters in Juba.

"There must be some sort of relationship where China can play a positive role, even in this war. You see it is like a case of a husband with two wives," he said referring to China's relationship with both Sudans.