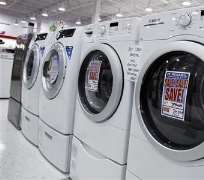 Demand for long-lasting manufactured goods was the weakest in three years in March and a gauge of business spending plans fell, suggesting the economy lost momentum as the first quarter drew to a close.

Economists had forecast orders for durable goods, which range from toasters to aircraft, falling 1.7 percent after a previously reported 2.4 percent rise in February.

"This adds to the evidence that momentum in the economy sort of fell flat in March," said Ellen Zentner, a senior economist at Nomura Securities in New York.

The data came as officials at the Federal Reserve met for a second day to deliberate on policy. The central bank is not expected to make any policy changes and will issue its statement at the end of the meeting around 12:30 p.m. EDT (1630 GMT).

Stock index futures pared gains on the data, while prices for Treasury debt pared losses to stand little changed. The dollar extended losses against the yen.

The report was the latest to show the manufacturing sector losing a step in March and it added to signs that the economy ended the first quarter on a soft spot.

Data last week showed industrial production was flat in March for a second straight month, while some gauges of regional factory activity weakened in April.

Manufacturing has been one of the main sources of economic growth, but is slowing as euro zone economies slide into recession and China cools.

Even though there are signs of some weakening in economic data early in the second quarter, economists believe the bar remains high for the Fed to ease policy further through a third round of bond purchases or quantitative easing.

Data on Friday is expected to show gross domestic product grew at a 2.5 percent annual rate in the first quarter, according to the median of a Reuters poll, after expanding at a 3 percent pace in the fourth quarter.

Orders for durable goods last month were dragged down by a 12.5 percent plunge in bookings for transportation equipment - the most since November 2010.

That reflected a 47.6 percent drop in bookings for civilian aircraft. Boeing received only 53 orders for aircraft, according to the plane maker's website, down from 237 in February.

Economists had expected this category to rise 0.9 percent after a previously reported 1.7 percent increase.

"What this tells us for business investment is that ... the wind has been taken out of the sails, going into the second quarter," Zentner said.

But shipments of non-defense capital goods orders excluding aircraft, which go into the calculation of gross domestic product, rose 2.6 percent after increasing 1.4 percent in February.

This suggests that growth in business investment in capital goods increased in the first quarter, but probably not as much as in previous periods.