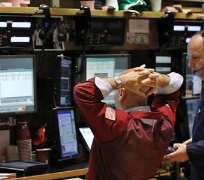 Stock index futures crept higher on Tuesday after sharp market losses in the previous session but continued concerns about Europe's debt crisis could mean gains will be slight.

The Dutch state successfully sold two bonds at an auction a day after the government collapsed in a crisis over budget cuts, but investors demanded a slightly higher risk premium for the long-dated bond as euro zone yields edged higher.

"There is this persistent worry over the euro zone now," said Peter Cardillo, chief market economist at Rockwell Global Capital in New York. "It appears that the markets are trying to force once again the EU to take a more aggressive approach in terms of growth."

Results from Apple Inc after the close may be a stabilizing factor for the Nasdaq during the day. The results will be dissected after a share swoon raised concerns a gravity-defying rally is over. Apple is down 10 percent from its closing peak this year.

S&P 500 futures rose 4.5 points and were above fair value, a formula that evaluates pricing by taking into account interest rates, dividends and time to expiration on the contract. Dow Jones industrial average futures gained 33 points, and Nasdaq 100 futures added 14.5 points.

A key European index rose 0.7 percent early Tuesday following the last session's losses, but gains could be fragile as fears over the euro zone debt situation persisted, with Spanish and Dutch debt auctions under the spotlight.

Facebook Inc reported its first quarter-to-quarter revenue slide in at least two years, a sign the social network's sizzling growth may be cooling as it prepares to go public.

Boeing Co has pulled ahead of Airbus in a race to win an aircraft order potentially worth more than $15 billion with United Continental Holdings Inc.

On the macro front, investors awaited the S&P/Case-Shiller Home Price Index for February, due at 9 a.m. EDT (1300 GMT), and April consumer confidence and new home sales for March, both due at 10 a.m. (1400 GMT).

Yahoo Japan Corp's negotiations with key shareholder Yahoo Inc over a share buyback ended with no agreement, but the companies may still hold talks, a Yahoo Japan official said.

Stocks fell Monday as political turmoil in Europe cast doubts on the euro zone's ability to push through measures to end its debt crisis and as Wal-Mart shares sank on concerns about a bribery investigation in Mexico.