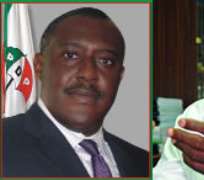 Metuh & Jega
The state congresses of the Peoples' Democratic Party (PDP) held across the federation was a test case for the party to put its house in order and assure party faithful and Nigerians that the proclamations by its leaders to entrench internal democracy in the acrimonious  platform is for real.

But  as it was the practice in previous exercises conducted by the party that prides itself as the largest political party in Africa, the contests to produce state officers for the party was rancorous: in states where the PDP was in control. It was  a battle between state governors desirous of  appropriating  the party structure and in states where  the Party has no governor, like in South-west zone, party gladiators held one another by the jugular to control the party structure.

It was litigation galore as certain stalwarts even defied court judgment and  in state like Ogun, chieftains of the party ignored the national secretariat of the party directive  not to hold  state congress.

In Ogun State, the Dayo  Soremi  faction  conducted a congress in defiance to the party National Working Committee  directive that no congress should take place. Justifying its action, leader of the faction, which claimed that the Independent National Electoral Commission, (INEC) and security agencies monitored the process, submitted that it had been recognised by a court judgment as the authentic executive.

Few days after the ward congresses, party stakeholders from Taraba State had stormed the party national secretariat with a petition, asking the Peoples' Democratic Party National Working Committee to restrain the state Governor, Danbaba Suntai, from making a mockery of the entire process, as he was alleged to have taken control of the process from the ward congress.

In the petition addressed to the former  acting national chairman of the party, Alhaji Kawu Baraje, the PDP elders said Governor Danbaba Suntai was acting against the directive of the party for a transparent process as he was alleged to be compiling list of party executives.

'Shortly before the so-called  ward congress, Governor Suntai had addressed a handful of people he referred to as stakeholders from the 16 local governments at the Government House, Jalingo, where he informed them that the party directed at its National Executive Committee meeting that there should be no election due to security reasons and that everybody should go back home and cooperate with the committees to fashion out the way forward. Probably that is why Governor Suntai concocted the list of all ward aspirants in the Government House long before the date of congresses.'

They further alleged that members of the party, who were interested in contesting for various offices were denied the nomination forms as the governor took over all the forms as soon as they were released by the national secretariat of the PDP.

'Governor Suntai hijacked the ward congress nomination forms from the state party chairman soon after they were brought from the national secretariat and hid or kept them in Government House amidst bickering, cries and complaints from most stakeholders within and outside Taraba State, most particularly the written complaints addressed to the national secretariat by the two Senators from the northern and central zones of the state, dated January 31, 2012.

'It became worrisome that Governor Suntai did not release the said nomination forms until about midnight of the March 2, 2012 and that the forms were not released to the party chairmen as procedurally and customarily the practice obtained in all congresses of the party.'

The petition, which was signed by some elders of the party from the three Senatorial  zones in the state, further alleged that  rather than ensure  that there was congress in the state, the governor formed a five-man main committee with himself as chairman, which took over the role and responsibility of the PDP state executive committee.

'We urge and call on all stakeholders of our party, especially the National Working Committee, NWC, and the Board of Trustees, (BoT) to, as a matter of survival of our great party in Taraba State, order for the immediate investigation of the conduct of the so-called  ward congress and other forth coming congresses in Taraba State with a view to finding lasting solution to the problem of one-man-show of might, which Suntai currently implores and which must be expeditiously checked so as not to lead the party to the doldrums in Taraba State.'

INEC faults exercise
Daily  Sun findings revealed that the country electoral body, the Independent National Electoral  Commisssion (INEC),  which supervised the congresses, was not comfortable with the infractions that trailed the exercise and it actually notified the party's national secretariat to correct them.

INEC, in a letter  written by its secretary, Alhaji Abdullahi Kaigama, dated 5th March, 2012, and addressed  to acting national chairman of the PDP, Alhaji Kawu Baraje, declared that the ward congresses conducted in 10 states of the federation by the PDP fell short of the expectations of INEC. It observed that the exercises were marred by violence, non compliance with the PDP constitution and approved INEC guidelines.

INEC in the letter identified  Sokoto, Taraba, Plateau, Nasarawa, Jigawa, Lagos, Anambra, Katsina and Kano as states where the congresses were flawed.

Playing the Ostrich
Even as it acknowledged the correspondence from INEC and the import of its observations, the  PDP NWC under Kawu Baraje did nothing to address them, as the party still went ahead with its scheduled state congresses.

Before  the national convention of the party, former  acting national secretary of the party, Dr. Musa Babayo,   while reacting to observations made by INEC  and party faithful, who thronged the party national secretariat,  told Daily  Sun that their complaints would be looked into. 'Yes, you are right; we have received correspondences and we are responding to that.

INEC is charged statutorily with monitoring of congresses; that's the role assigned to it by the Electoral  Act. You will agree with me because of dearth of personnel, even on the part of INEC, they may not be in all the polling units in a constituency, simultaneously at a time. There might have been cases like it was reported, where those things happen but we are investigating and we would address them, because one of our major cardinal responsibilities essentially is to ensure that a level-playing field is created for everyone.'

'So, our responsibility as managers of this  process is to ensure that it is played in accordance with the rules and where there are deviations, perceived or real, we will make attempts in very sincere and determined manner to address them to the satisfaction of all. So, we are working on that and in the next few days we will make response after the conclusion of our investigation to the electoral body.''

It was a pledge that was never redeemed  by the Alhaji Kawu Baraje PDP NWC, to the consternation of its concerned party chieftains.

Bamanga: A future in the past?
Daily Sun investigations revealed that expectations by aggrieved party faithful that the new national leadership of the party would redress the perceived imbalances thrown up by the state congresses with tacit support of the Alhaji Kawu Baraje-led  NWC despite claims to the contrary is now being dashed by the new helmsmen at Wadata Plaza.

At the end of its NWC meeting last Wednesday, they were silent on the agitation of party chieftains, who are kicking against the congress conducted in Taraba state.

But it  directed  in a statement signed by its national publicity secretary, Chief Olisa Metuh,  that the zonal executive of the party under former Ekiti State governor, Segun Oni, to take over the running of the Ogun State chapter of the party, while it endorsed the Makanjuola Ogundipe-led executive as the authentic executive in Ekiti State.

'The meeting further directed the South-west Zonal Executive Committee to immediately take over the running of the affairs of the Party in Ogun State, pending further decisions by the NWC. Similarly, the National Working Committee (NWC) resolved that the Makonjuola Ogundipe-led Ekiti State Executive Committee of the PDP is the authentic leadership of the party in the state. The NWC, therefore, wishes to direct other leaders, elders and members of the party in Ekiti State to comply with this directive, as it shall not condone the formation of parallel executive. It also urged the State Executive Committee to work harmoniously with all Party members to ensure reconciliation and unity.''

Its position on Ekiti and Ogun States crises has, however, courted the disdain of aggrieved party members in the two states. The factional chairman in Ogun State, Engineer Adebayo Dada, has dismissed the position of the PDP NWC.

A party source, who craved for anonymity, told Daily Sun that the Ekiti State crisis could put the new leadership in the bad books of party chieftains in the zone, as  the new national vice chairman of the party, former Ekiti State governor, Segun Oni, is an interested party.

The Ekiti State chapter is polarised  along factions loyal to Police Affairs Minister, Caleb Olubolade,  former Ekiti State governors, Ayo Fayose  and Engineer Segun Oni. Akin Omole, a factional chairman, has refused to recognise the congress that produced the Makanjuola Ogundipe-led executive in Ekiti. The latter had polled 318 votes against the former 310 votes at the March congress.

Even as party faithful from Taraba watch with consternation, the recognition given to the new executive of the party in the state by the national secretariat, despite their open disdain and INEC reservations, National Publicity Secretary of the party, Chief Olisa Metuh, has assured that  the new national executive would not contravene INEC position and the interest of majority of party members in the affected states.