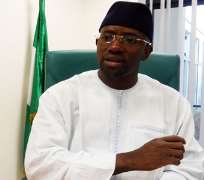 ABUJA, April 23, (THEILL) - Several individuals, marketers and corporate organisations that were undone by the findings of Farouk Lawan’s ad hoc committee that probed the management of subsidy regime have been making desperate bids to discredit its consideration, according to the Federal House of Representatives.

The House consequently described as “an orchestrated plot to scuttle the findings of the committee,” the purported legal action against it by a group of 18 marketers as well as allegations by the Nigerian National Petroleum Corporation (NNPC) that the report has been altered.

Chairman of the House Committee on Media and Public Affairs, Hon. Zakari Mohammed who made the declaration in a press release on Monday, alleged that many individuals, companies and marketers have launched a vicious campaign to impugn the authenticity of the report.

“Following the presentation of the report on subsidy regime, several individuals, marketers and corporate organisations not favoured by the report have sought to

impugn its authenticity,” Zakari said. “Coming under various guises, including but not limited to buck-passing and alleged non-invitation to the investigative hearing, several of them are desperately seeking to undermine the outcome of the consideration of the report, billed for tomorrow [Tuesday].”

He urged Nigerians to dismiss the actions of corrupt people

saying, “as the House of Representatives begins a clause-by-clause consideration of the report tomorrow, we urge all Nigerians to be vigilant and wary of those who

would rather that the country continues to be run in the usual corrupt way, which puts unmerited resources in individual pockets at the expense of the people.”

He noted that the group of 18 marketers, who were deeply involved in the subsidy payouts, were invited to appear before the ad hoc committee but they declined.

“Despite repeated appeals by the Farouk Lawan-led committee to all those who had anything to do with the country’s subsidy regime between 2009 and 2011 that they should come forward and make representations before it, some of these

organisations conveniently chose to stay away, obviously because they had something to hide,” he said. “Their purported recourse to legal

action is, in our opinion, an orchestrated plot to scuttle the findings of the committee.”

“NNPC’s claims that the ad hoc committee report may have been altered to embarrass the NNPC) is only in tandem with the current reckoning of its spokesman as a ‘chief denial officer,’” he teased. “The Corporation must have been in possession of another version of the report for it to assert that the one officially laid before the House of Representatives on Wednesday, April 18, 2012, was altered.”

It will be recalled that the NNPC yesterday took paid advertisement in newspapers to discountenance the report on the grounds that was doctored. Similarly, 18 marketers were reported to have resolved to seek redress against the report, which indicted them, in court.