What’s The Meanest Thing You’ve Done To A Dude? 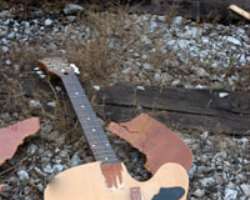 Over at Tracie Egan's blog One D At A Time, she writes about a recent fight she had with her fiance, in which she was left so enraged (and convinced that they were through) that she put his electric guitar in her bathtub and proceeded to pee on it over the course of a day.

Oh, and she had her period too, “so it was extra destructive and stinky. The guitar, of course, is ruined.”

This anecdote is buried within a larger post about the Rihanna/Chris Brown scandal and she tells it as a way of conveying what it's like to be both the offender and the offendee.

And while the context of the post is sad—the image of Rihanna post-beating is at the bottom—this particular nugget made me almost wet myself. Haven't we all done something out of control to the one we love/like in a crazy rage? I have.

Years ago, when I was drunk and out on the town, the guy I loved (loved, like, madly) told me he had a new girlfriend—in a rage (he had waited to tell me this information until after I had taken an eight hour bus ride down to visit him in D.C.) I kind of, sort of, maybe shoved him into oncoming traffic. He didn't get hurt at all, thank god, and somehow has forgiven me.

We're even friends! What's the nuttiest thing you've ever done when you've been pissed at a significant other?