Sex Pheromones are Bending the Laws of Attraction 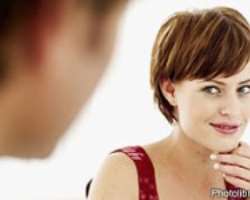 (ARA) - Sexual attraction may have a lot to do with chemistry after all. Throughout history, it has been a mystery why certain humans are intimately attracted to each other. Scientific research has now concluded that dating and mating is highly influenced by pheromones, powerful chemicals produced by the body.

Pheromones are natural air-borne chemical hormones the body produces to attract the opposite sex. You can't see them or smell them, yet they can be powerful enough to instantly draw another person like a magnet.

Dr. Virgil Amend reveals the discoveries that led to the development of an effective pheromone formula for men called "Pheromone Advantage".

Dr. Amend explains, "Scientists have known for decades about an organ just inside the nasal cavity called the vomeronasal organ (VNO). It appears that the sole function of the VNO is to detect trace amounts of pheromones, and in turn, stimulates the limbic region of the brain, also known as the 'Seat of Emotions'. This area of the brain is responsible for our emotions and passionate desires."

"What's quite interesting", Dr. Amend continues, "Is it has been recently discovered that specialized nerve pathways known as "Nerve O" run directly from the VNO to the limbic region. These specialized nerves were thought to remain dormant the majority of the time, but have now been confirmed to become quite active when subjected to specific human pheromones. The evidence tells us that humans do, in fact, respond to pheromones just as animals do, and the best part is this response can be triggered intentionally".

"Attraction is really all about chemistry" says Dr. Amend, "After all, men and women have been programmed from the beginning for one basic purpose … and that is to reproduce. This formulation for men merely taps into the power of nature's chemistry by triggering the signals women are programmed to sense and respond to".

A precise concentration of pheromones can kick off a rush of chemicals in the brain within a matter of seconds, and can make people feel a strong emotional and physical response. "The next thing we know, the fireworks begin," says Dr. Amend. "This formulation can produce that response, and while the chemical cascade may take mere seconds to occur, the effects can last a lifetime."

Developed with Dr. Amend, the Pheromone Advantage. formulation for men blends the four most powerful pheromones proven to activate the VNO organ in women in a highly concentrated formula, and sells for just $39.95 for a two months supply.

"Humans naturally produce their own pheromones." Dr. Amend continues, "However, our cultural habits can wash away, distort or hide our natural pheromones with frequent bathing, detergents, antiperspirants, etc. By supplementing with a few drops of the Pheromone Advantage formula, men can not only replace natural levels of these pheromones, but boost levels to the extent that the concentration is unavoidable in their presence."

Dr Amend's formula is now supercharging the love lives of thousands of men. To put the power of pheromones to work for you, visit www.PheromoneAdvantage.com for all the facts and details on a special buy 2 get 1 free offer.