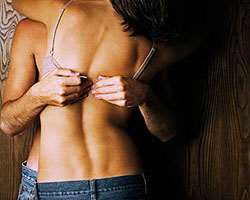 Seductive chemicals are hidden in sloppy kisses, scientists say, but even the most chaste caress can spark an intense hormonal response.

"Men like sloppier kisses with more open mouth and that suggests to me that they are unconsciously trying to transfer testosterone to trigger the sex drive in women," said Helen Fisher, an anthropologist at Rutgers University in New Jersey.

Kissing can certainly open the door to sex, Fisher said.

But it can also close it: a recent study found that the first kiss was the "kiss of death" for budding relationships.

"Should you drool more? You don't want to turn off your partner," Fisher warned.

Kissing is a natural instinct that likely serves a number of evolutionary purposes, said Fisher, one of the leading experts in the biology of love and attraction.

Men's preference for sloppy kisses with lots of tongue may help them over come their poor sense of smell and taste.

Evolutionary?
"What they might be doing is trying to pick up the estrogen cycle in a woman to figure out the degree of her fertility."

Kissing also stimulates an enormous part of the brain, but love can do even more, according to an experiment Fisher ran with MRI brain scans.

Fisher found people who had recently fallen in love had high levels of activity in the reward system in the brain that produces dopamine and is linked to craving, motivation, focused attention and goal-oriented behaviour.

"Rejected people showed a great deal of activity in several areas directly associated with addiction," Fisher told reporters gathered at the American Association for the Advancement of Science.

Kissing raises oxytocin levels among men and also lowers stress hormones in both men and women, according to a study that will be presented at the conference on Saturday.

Wendy Hill, a neuroscience professor at Lafayette College, tested the saliva and blood of 15 couples who spend 15 minutes either kissing or holding hands and talking.

She found that the women had significantly higher levels of the pair-bonding hormone than the men before the experiment started, but those levels dropped when they were tested after the experiment was completed.

It was a surprising result, which Hill said could be attributed to the fact that the test was run in the college's health centre and that a bit of soft music and some flowers were not enough to get the women in the mood.

"We're running the setting again in a more romantic setting," Hill said. "It's a secluded room in an academic building. It has a couch, it has flowers, it has candles — electric because of fire hazard issues — and we have light jazz playing."