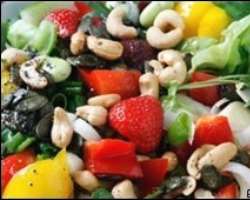 Changes to diet can cut cancer, the fund said
Listen to article

Four out of 10 people are unaware eating a poor diet increases the risk of cancer, a new study suggests.

The poll of almost 2,000 people found 41% were unaware of the link between their diet and the disease.

And only one in three people knew processed meat increased cancer risks, while 44% did not know being overweight was another risk factor.

'Simple steps'
The survey also found less than half of those surveyed - 44% - knew that exercise and an active lifestyle also cut the risk of cancer.

Lisa Cooney, head of education for the WCRF said: "The scientific evidence is clear that people can reduce their risk of cancer through eating healthily and reducing their intake of things like alcohol and processed meat.

"But these results show that there are still millions of people in Britain who are unaware of how they can take simple steps to reduce their cancer risk.

"This means they are not in a position to make informed lifestyle choices."