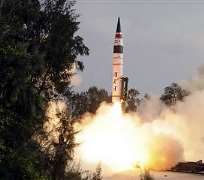 India test-fired a long range missile capable of reaching deep into China and Europe on Thursday, thrusting the emerging Asian power into an elite club of nations with intercontinental nuclear weapons capabilities.

A scientist at the launch site said the launch was successful, minutes after television images showed the rocket with a range of more than 5,000 km (3,100 miles) blasting through clouds from an island off India's east coast.

"It has met all the mission objectives," S.P.Dash, director of the test range, told Reuters. "It hit the target with very good accuracy."

The Indian-made Agni V is the crowning achievement of a now-mothballed missile program developed primarily with a possible threat from neighboring China in mind.

Only the U.N. Security Council permanent members - China, France, Russia the United States and Britain - along with Israel, are believed to have such long-range weapons.

Fast emerging as a world economic power, India is keen to play a larger role on the global stage and has long angled for a permanent seat on the Security Council. In recent years it has emerged as the world's top arms importer as it rushes to upgrade equipment for a large but outdated military.

"It is one of the ways of signaling India's arrival on the global stage, that India deserves to be sitting at the high table," said Harsh Pant, a defense expert at King's College, London, describing the launch as a "confidence boost".

The launch, which was flagged well in advance, has attracted none of the criticism from the West faced by hermit state North Korea for a failed bid to send up a similar rocket last week.

But China noted the launch with disapproval.
"The West chooses to overlook India's disregard of nuclear and missile control treaties," China's Global Times newspaper said in an editorial published before the launch, which was delayed by a day because of bad weather.

"India should not overestimate its strength," said the paper, which is owned by the Chinese Communist Party's main mouthpiece the People's Daily.

India has not signed the non-proliferation treaty for nuclear nations, but enjoys a de facto legitimacy for its arsenal, boosted by a landmark 2008 deal with the United States.

On Wednesday, NATO said it did not consider India a threat. The U.S. State Department said India's non-proliferation record was "solid," while urging restraint.

INSIDE CHINA
India says its nuclear weapons program is for deterrence only. It is close to completing a nuclear submarine that will increase its ability to launch a counter strike if it were attacked.

India lost a brief Himalayan border war with its larger neighbor, China, in 1962 and has ever since strived to improve its defenses. In recent years the government has fretted over China's enhanced military presence near the border.

Thursday's launch may prompt a renewed push from within India's defense establishment to build a fully fledged intercontinental ballistic missile (ICBM) program capable of reaching the Americas, though some of India's allies may bridle at such an ambition.

"Policy-wise it becomes more complicated from now on, until Agni V, India really has been able to make a case about its strategic objectives, but as it moves into the ICBM frontier there'll be more questions asked," said Pant.

The Agni V is the most advanced version of the indigenously built Agni, or Fire, series, part of a program that started in the 1960s. Earlier versions could reach old rival Pakistan and Western China.

The rocket is powered by easier-to-use solid rocket propellants and can be transported by road.