THE HUNTED HUNTING THE HUNTER: CALL FOR SCRAPPING OF EFCC BY ORANSANYE'S PANEL 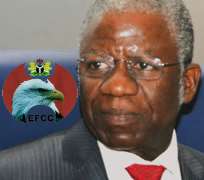 It is a hidden truth that we have Proliferation of agencies and parastatals but it is also a given that some of the newly created agencies and parastatals are more efficient and effective than the one of old. As we know, the only anti-corruption agency that is perceived to be at the fore-front of combating corruption in Nigeria of today is the Economic and Financial Crimes Commission (EFCC) and such agency is supposed to be encouraged.

Considering the peculiarity of cases which the agency is handling and its achievements so far, one would conclude that if EFCC is scrapped as suggested by the Presidential panel headed by the former Head of Service, Steve Oransanye, Nigeria cannot develop from being a pariah among the committee of state.

One of the committee’s most striking recommendations was the scrapping of the EFCC and the ICPC, with their functions taken over by the police.

It would be recall that there is a special fraud unit in the Police before EFCC and ICPC were established. One may be curious to ask that if truly the Nigerian Police fraud unit is living up to expectation, would there be a reason for the establishment of EFCC and ICPC in the first place?

On a personal ground, I think EFCC should be allowed to stay because of its unique status; ICPC may be merged with EFCC instead of scrapping both as recommended by Oransanye’s committee. EFCC should be strengthened with infrastructure and manpower.

Having said that, it is ironic that the commission headed by Steve Oransanye who incidentally was the former Head of Service of the federation would recommend the scrapping of EFCC at this point in time that the agency just helped them to recover over N100 Billion from police pension fraud which was perpetrated under Oransanye’s tenure as the Head of Service of the federation.

I want to belief that anyone who is serious about the eradication of corruption will not be making such a recommendation at this crucial time when there is no alternative to the anti-corruption agencies.

Why would Steve Oransanye want EFCC and ICPC scrapped? or could it be the case of Steve Oransanye and Politicians having something in common? Does he have an agenda? What is the agenda all about and for whom? All these are questions waiting for an answer from Steve and his committee members.