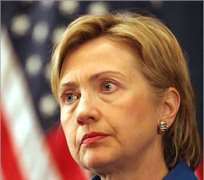 American Secretary of State Hillary Clinton yesterday in Abuja said Nigerian leadership has failed at all levels, with poverty deepening and corruption firming its roots. On her first full day in Nigeria as part of a seven-nation, 11-day African tour, Mrs. Clinton called for stout action against graft as well seamless electoral reforms so that Nigeria could take up what she said was its rightful place in the international community.

Speaking at Town Hall Meeting jointly organised by the Transition Monitoring Group (TMG) and the U.S. Mission in Nigeria, Mrs. Clinton said, “The most immediate source of the disconnect between Nigeria's wealth and its poverty is a failure of governance at the federal, state and local level.”

“The lack of transparency and accountability has eroded the legitimacy of the government and contributed to the rise of groups that embrace violence and reject the authority of the state,” she said.

Cutting off applause from a boisterous crowd mid-sentence, Clinton said that the United States supported Nigeria's entry in the Group of 20—the club of key rich and developing nations—but hesitated because of its corruption.

She said the Economic and Financial Crimes Commission (EFCC) which had been “doing good work in the past has fallen back in the past one year.”

Clinton rattled off a string of figures, including a World Bank study that Nigeria's corruption and related problems had cost the country some 300 billion dollars over the past three decades.

“Today I'm in Nigeria, a country that produces two million barrels of oil a day, has the 7th largest oil reserve than any country in the world. But according to the UN, the poverty rate in Nigeria has gone up from 46 per cent to 76 per cent over the last 13 years,” Mrs. Clinton said.

She said the rising religious extremism, militancy and criminality in Nigeria were obvious signals of social exclusion, and said the key to lasting solution was effective governance, service delivery and social inclusion.

Mrs. Clinton told an audience that include civil society groups, opposition politicians and government officials that fixing Nigeria's electoral system is at the core of any meaningful political reform.

American top diplomat acknowledged that Nigeria has taken some meaningful steps in collaborating with relevant international agencies in curbing human trafficking, but said the country failed in electricity generation and tackling poverty.

The U.S. Secretary of State had earlier met with President Umaru Yar'adua at the State House Abuja, where Yar'adua admitted that Nigeria has good governance challenges and reaffirmed his commitment to rectifying the situation.

Briefing newsmen after the closed-door meeting between the president and Mrs. Clinton, Foreign Affairs Minister Ojo Maduekwe said Yar'adua acknowledged before Mrs. Clinton that Nigeria has challenges in the areas of corruption, rule of law and electoral reform and pledged to intensify efforts to address the problems.

“The president's position about good governance, the need to fight corruption and the issue of the rule of law, it was clear to the Secretary of State that both President Yar'adua and President Obama are on the same page on these issues,” the minister said. “It was a great conversation—electoral reforms and commitment to the rule of law, the fight against corruption. The president acknowledged that we have serious challenges there. The President made it clear that the whole thing goes even more than the rule of law. It's about attitude and this affects the integrity of the electoral process,” he added.

He said Nigeria and the US government have resolved to establish a joint commission to address the leadership challenges facing the country. “One of the most powerful indications of that partnership is that the secretary of state has pledged the commitment of the Obama administration to evolve a special relationship with Nigeria that will warehouse in what could be known as US/Nigeria Bi-National Commission,” the minister said.

He said the meeting between Clinton and the president was “very productive, the way you will expect it to be among friends. Honest, candid, encouraging, mutually inspiring, mutually re-enforcing and ultimately strategic”.

Maduekwe denied reports that the American Embassy did not involve the Nigerian government in the planning of Clinton's itinerary while in Nigeria, saying the embassy consulted and collaborated with his ministry to ensure the success of the visit.

Mrs. Clinton leaves Nigeria today to Liberia. She will move on to Cape Verde before returning to Washington.