NOW A WORLD OF LIMITLESS OPPORTUNITIES FOR THE ALMAJIRIS 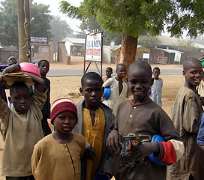 I have, for a long time, been very worried about the Almajiri phenomenon in the northern part of the country. My sensibility is always touched whenever I take my children to school in the morning in Abuja and I see these children swarming round vehicles that have been stopped either by the traffic lights or traffic wardens, begging for alms, when they should be in school.

The modus of begging is diverse, depending on location and/or environment. The almajiris operate on the streets. They also move from house to house to beg for alms. A majority of them parade one disability or the other. But begging is not all about the almajiris. Quite a number of them, in some other locations, especially in the northwest of the country, attend informal Islamic schools. In fact, not a few of them engage in some form of manual labour to eke out a living.

But all of these engagements do not conduce to anything dignifying. They do not translate to westernization or modernization. They do not bolster civilization within the context of western education. The absence of western education has always made nonsense of the Islamic education (the study of Arabic language and the Quran) to which most, if not all, of the almajiris have always been subjected. We all know that Islamic education has built and consolidated the religious component of the lives of these almajiris. A good number of them have the incredible capacity to recite the Quran. But is recitation of the Quran all about life in a society that places premium on formal education qualifications?

The religious indoctrination, without the preponderating influence of western education, has unfortunately helped to build an army of zealots who have become ready tools in the hands of the political elite, nay power-seeking politicians, who use violence induced by religion to settle scores. These almajiris have wittingly or unwittingly lent themselves to despicable usage by these power mongers.

But for those who have been lucky to become Islamic scholars and leaders through the exposure to the study of Arabic and Quran, there is an understandable limitation: lack of western education. In recent times, due to the cosmopolitan nature of Islamic propagation, there has been the need to deploy the instrumentality of western education to assist the propagation of Islam. We live in a dynamic, ever-changing world and the almajiri system, within the context of socialization, is not an exception.


This is why there was a deep sense of understanding when on Wednesday, 9th April 2008, a Bill for the Establishment of National Commission for the Eradication of Child Destitution was introduced and read for the first time in the Senate. The Bill was sponsored by Senator Umar A. Tafidan Argungu (Kebbi North Senatorial District) and forty other members. The Bill passed through the second reading and was committed to the Senator Eme Uffot-Ekaette-led Committee on Women Affairs for further legislative action. The Committee was to organize a public hearing on the Bill to receive input from stakeholders preparatory to third reading and passage. It never happened in the sixth Senate; but nothing could obliterate the record of the effort made by Argungu and his colleagues.

It is significant that credit should be given to the Argungu team for adverting legislative attention to the worrisome almajiri system in the north. In his lead debate during the second reading of the Bill, Argungu said the Bill was to provide for the establishment of a commission to serve as government intervention programme for eradication of child destitution from the society. He stated that, “It is also to harmonize the system with western and vocational curricular to give the destitute child a sense of belonging and purposeful future in the society.”

According to him, “…These are children who were let out by their parents/guardians to study Arabic and the Quran, which was later referred to as the Almajiri system…. Today, the Almajiri system has been corrupted by the operators and turned millions of under-aged children into beggars who otherwise would have become useful citizens to themselves, the society, the nation and humanity. The fact, that there are millions of these under-aged children thrown into destitution, calls for concern of all of us.

“Undoubtedly, the problem of child destitution has brought about profound negative effect on our cities and it may have in one way or the other added to the huge statistics of crimes and illiterate population in the society. It is very sad that the system has succeeded in inculcating negative traits and influence in those children who were shepherded into cities without proper upkeep to roam the streets begging for alms.

“This ugly scenario in most of our cities will convince any person that the menace of Almajiri system (child destitution) has eluded the social reforms of government, as multitude of under-aged children swarm shopping centres, motor parks, petrol stations, restaurants, night clubs, beer parlors and brothels looking for pittance and handout on which to survive…. Without basic education as a tool for survival, these children are readily willing tools of selfish leaders for the destabilization of any constituted authority….

“Therefore, the establishment of the National Commission for the Eradication of Child Destitution would facilitate the integration of the almajiri schools into western education while still maintaining their purposeful identity. The Commission should take a census of all almajiris in the country with a view to collating the necessary data to classify and integrate them variously into primary and secondary or vocational education….”

It is sad that the Senate could not push through the legislative framework for the eradication of the almajiri menace but it is heartwarming that without a legislative framework, the Executive arm of government has now moved to confront the menace head-on. On Tuesday, April 10, 2012, news filtered in from the seat of the Caliphate, Sokoto, that President Goodluck Jonathan had inaugurated the first Almajiri Model Primary School in Gagi area of the state.

Jonathan was reported to have said that the initiative was meant to provide the almajiris with conventional modern skills that would enable them to be productive members of the society. The project, according to him, was meant to change the future of the almajiris and tailored to be in tune with the technology and knowledge-driven world.

According to the president, “Statistics indicates that there are about 9.5 million almajiris in the country out of which the Northwest alone accounts for over 5 million-about 60 percent of the entire almajiri population…. We feel that we must modernize the almajiri system. The fact that a majority of these children do not attend conventional education makes it worrisome. It was in view of that that I directed the minister of education to design an intervention programme for the Federal Government and states to address the issue.”

Indeed, the Federal Government is constructing 35 Almajiri schools under phase one and is providing funding for the project while state governments would maintain the facilities and pay remuneration of teachers. The Universal Basic Education Commission (UBEC) would provide 51 schools under the phase two. This, no doubt, is a massive and decisive intervention by government. Applause has come for the intervention from different quarters: for instance, the Sultan of Sokoto, Alhaji Muhammad Sa’ad Abubakar 111 said it would provide fair opportunities to every child and equip school age population to lead productive lives and contribute their quota to national development.

The Sultan was right when he said the Almajiri School would provide fair opportunities to every child; in fact, that was understating the import of the reality. It would indeed provide the almajiris a world of limitless opportunities. Transformation is beckoning. Civilization is beckoning. Competitive advantage (bilingualism and religiosity with a concrete mix of western education) beckons.

Indeed, the foundation of a new orientation has been laid and the nation stands to benefit a great deal from the boundless innate energies and capacities of these children which are henceforth expected to be properly harnessed and channeled into productive ventures as opposed to the hitherto atavistic violence. The manipulators of the nation’s socio-political and religious differences as well as the brainwashed and gullible almajiris will soon be out of business. Jonathan’s critical transformation agenda has received a booster with this intervention that will shear our polity of the almajiri nuisance.