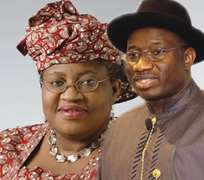 … Finance Minister Says “I am Proud To Be African”

SAN FRANCISCO, March 16, (THEWILL) – Nigerian globally respected Finance Minister and the sole candidate of emerging economies for the President of the World Bank Group, Dr. Ngozi Okonjo-Iweala has congratulated the eventual nominee of the Board of Directors of the Bank, US candidate, Dr. Jim Yong Kim on his election as President of the Bank.

Ngozi lost out to Kim, who was chosen on Monday morning in Washington DC where the body is headquartered.

In a statement released after Kim was announced as new President, Ngozi Okonjo-Iweala however pressed the Bank to make the election process more transparent and promised to work with the leadership and staff for the benefit of the poor.

The statement reads: “I would like to congratulate Dr Jim Yong Kim on his emergence as President of the World Bank Group. I look forward to working with him, staff and stakeholders of the World Bank Group for the benefit of poor people around the world. Their plight is at the heart of the mandate of the institution and we must never lose sight of that.

“With regard to the selection process, it is clear to me that we need to make it more open, transparent and merit-based. We need to make sure that we do not contribute to a democratic deficit in global governance.

“Nevertheless, by our participation we have won important victories. We have shown what is possible. Our credible and merit-based challenge to a long-standing and unfair tradition will ensure that the process of choosing a World Bank president will never be the same again. The struggle for greater equity and fairness has reached a critical point and the hands of the clock cannot be turned back.

“I congratulate Dr Jose Antonio Ocampo for being a worthy participant and for his decision to withdraw his candidacy in my favour.

“I am proud of Africa for displaying great unity in supporting my candidacy. I am proud of my country Nigeria for standing by me. I want to thank all the African leaders, but particularly President Goodluck Ebele Jonathan for his resolute support, along with other leaders – President Boni Yayi of Benin Republic, President Alassane Ouattara of Cote d’iVoire, President Jacob Zuma of South Africa and Chair of the African Union, Mr Jean Ping. Africa has stood for the right principles throughout these processes. I am proud to be African.

“I want to thank other developing countries who supported my candidacy. I also thank the Nigerian public, the National Assembly and the Nigerian and international media for their analyses and support. I am deeply grateful to the numerous groups and individuals in different parts of the world that worked so hard and so passionately in my support.

“It was a worthwhile battle. Now it is time to move on and contribute to the search for solutions to the many developmental challenges that confront the world.”

President Jonathan in a statement by Spokesman, Dr. Reuben Abati, also thanked the leaders, governments, peoples and friends of developing countries, as well as the media and other civil society groups, for the support and encouragement given to Nigeria's Coordinating Minister of the Economy and Minister of Finance, Dr. Ngozi Okonjo-Iweala.

The President restated the readiness of the Federal Government of Nigeria to continue to build on the existing cordial relationship and cooperation with the global institution.

President Jonathan wished Dr. Kim, the candidate of the United States in the race for the helmsman of the World Bank, a successful tenure. He urged him to see his election as a challenge and a great opportunity for addressing the numerous issues of human development and poverty alleviation facing developing countries in general and Africa in particular.

The President also enjoined the new World Bank President to broaden the achievements of his predecessor, Robert Zoellick, and respond positively to the calls for reforms of the multilateral institution. President Jonathan also commended Nigeria and the developing world for running a well-articulated campaign in the race for the presidency of the World Bank.

The President noted that Dr. Okonjo-Iweala represented the voice of developing countries in the imperative campaign for the reform of the World Bank, stressing that her participation in the race has been a truly rewarding experience, which should inspire all Africans and the rest of the developing world to remain optimistic about the future of the World Bank.