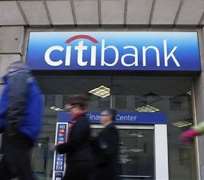 Citigroup Inc's quarterly profit beat Wall Street estimates as the third-largest bank cut expenses and benefited from an improved economy and more active capital markets after a dismal end to 2011.

Profit was boosted by loan growth in the lender's core Citicorp division, strong fixed income performance, and continued improvement in credit quality that allowed Citigroup to release reserves set aside for bad loans.

Shares of the New York-based lender, which received multiple bailouts during the financial crisis, were up 91 cents, or 2.7 percent, at $34.32 in Monday morning trading on the New York Stock Exchange.

"They continue to progress. They have headwinds that maybe only Bank of America has, but they seem to be managing those headwinds," said Gary Townsend, CEO of Hill-Townsend Capital. "It's a good quarter without being as superlative as JPMorgan's was."

The results support investor expectations for a recovery in the first quarter after the European debt crisis roiled markets late last year, and they augur well for other major banks such as Goldman Sachs Group Inc, Morgan Stanley and Bank of America Corp, all due to report results this week.

But the KBW index of bank stocks is already up more than 20 percent this year, and investors are now turning their attention to determining the strength and extent of the recovery, which still lags the optimism of early last year.

Loan growth in the first quarter was particularly strong for trade finance, he added in a conference call with reporters.

Chief Executive Vikram Pandit said in a statement, "While the operating environment improved in the first quarter, there is still much macro uncertainty and we will continue to manage risk carefully."

Excluding the impact of certain accounting adjustments for changes in the value of debts and credits, Citigroup earned $1.11 a share. The average Wall Street forecast was $1.00, according to Thomson Reuters I/B/E/S.

Revenue from the company's ongoing securities trading and investment banking business declined 12 percent from the strong quarter a year earlier but rose 65 percent from the weak 2011 fourth quarter.

Revenue for the whole company, excluding the accounting adjustments, was up 1 percent from a year earlier and 17 percent from the fourth quarter, to $20.2 billion.

Expenses were down 7 percent from the previous quarter and were flat with a year earlier, reflecting seasonal factors and the company's commitment to bring costs down for the year, Gerspach said in the conference call.

Citigroup's 2011 fourth-quarter earnings missed analysts' estimates and executives were grilled over the company's control of its expenses, which rose 4 percent in the fourth quarter from the third quarter. Expense control has become an increasingly important issue for banks because their profits are being squeezed by low interest rates and tighter regulation.

Last month, Citigroup was one of only a handful of large financial institutions that failed to win approval from regulators for a dividend increase or share buyback.

In the weeks leading up to the setback for the capital plan, Pandit convinced analysts that Citigroup had rebuilt its balance sheet to the point that it had so much more capital than needed in an economic downturn that it would to be allowed to raise its quarterly dividend from a nominal penny a share to as much as 10 cents.

Pandit was expected to take questions from analysts on the matter during a conference call later in the morning.

In the first quarter, a set of assets the company has been selling off or running down since the financial crisis declined 29 percent from a year earlier to $209 billion, or 11 percent of total Citigroup assets.