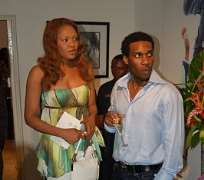 Contrary to rumors spreading around that Former Super Eagles captain, Austin Jay Jay Okocha, and his wife, Nkechi, were no longer in good terms, they have both denied having any hiccup in their marriage.

It was also alleged that Okocha has also been dribbling and scoring free kicks in between the thighs of many society girls in Lagos.

However, the couple has washed off their hands from this tale saying their marriage is still intact.

In a recent chat, Jay jay Okocha responded to the rumour.

“I just got into Nigeria at the weekend, and I attended the AY [Comedy Talk] Show together with my wife on Easter Sunday,” he said.

“Our marriage is still strong, and all those stories are nothing but fabricated rumours.”