JONATHAN'LL HAND OVER TO IGBO -EZEIFE 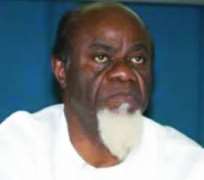 • Ezeife
As power brokers across the country make subtle moves ahead of the 2015 presidential election, former governor of Anambra State, Dr Chukwuemeka Ezeife, has said President Goodluck Jonathan would hand over to a candidate from the South East zone.

This conclusion came even as he dismissed the clamour to recapture power by the North, saying that the ethnic bloc should forget their ambition for now until the South East enjoys its share of the nation's presidential power equation.

He revealed that though the South East at no point reached an agreement with Jonathan on the succession issue, but the understanding between the President and Ndigbo is that one of their own should succeed him.

Speaking with Sunday Sun on phone, he said people of the zone had always made it clear to Jonathan that a candidate from the zone would succeed him when he leaves office. According to him, the understanding is that by the time Jonathan had exhausted his mandate, he would support the idea of an Igbo man becoming the next president of Nigeria.

'At every opportunity with Jonathan, Ndigbo have made it clear that anyt ime he completes his constitutionally guaranteed tenure, it would now be the turn of the South East,' he said. He, however, noted that the South East was not in a hurry to see Jonathan out of power, but would continue to support him until he completes his tenure.'I repeat what I said before, that the Igbo would succeed President Jonathan whenever he leaves office, but we are not in a hurry to hound him out of office.

'We have given Jonathan our total support, but we have always made it clear that after his tenure, it would now be the turn of the South East,' he said. The former governor also noted that the president has the constitutional right to run for a second term and recalled that some of his predecessors enjoyed similar opportunities in office. He said apart from the South East, all other geo-political zones have ruled Nigeria, lamenting that the short tenure of Gen Aguiyi Ironsi was mired in violence.

'The North should forget the presidency until the South East zone has enjoyed its turn. Out of the over 50 years of Nigeria's independence, the North ruled for about 38 years.

'The North knows that they should reorganize themselves.'