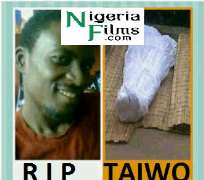 The atmosphere at the Atan Cementary, Yaba, Lagos yesterday was enough to tell the sadness on sympathiser's faces.

The dead Nollywood director, Taiwo Bello began his final journey home when he was laid to rest.

Taiwo died on Friday, April 13, 2012 after battling with cancer.

He was also a co-writer of Funke Akindele's hit movie, The Return Of Jenifa. His death came just five days after Prophet TB Joshua's prophecy of a death of an actor.

Though Taiwo was not an actor, but TB Joshua's prophecy has generated hot criticism after Taiwo's death.

Please, ensure you use the social media sharing below this page to spread this to your family and friends.

© 2012 Nollywoodgists.com. All rights reserved. This material may not be published, broadcast, rewritten or redistributed without the express written consent of the publish