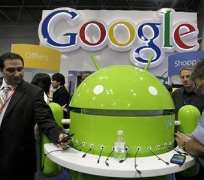 An unusual stock split designed to preserve Google Inc founders' control of the Web search leader raised questions and some grumbling on Wall Street, even as investors focused on the company's short-term business concerns.

Shares of Google closed 4 percent lower at $624.60 on Friday, driven by deepening worries about its search ad rates and payments to partners.

For some investors though, Google's move to split its stock and create a new class of non-voting shares represented a troubling development.

"We worry that this will set a precedent for other people to emulate this move," said Janice Hester Amey, a portfolio manager in the corporate governance unit of the California State Teachers' Retirement System, the second largest pension fund in the United States.

Google's existing stock structure, which concentrates roughly 66 percent of the voting shares in the hands of co-founders Larry Page and Sergey Brin and Executive Chairman Eric Schmidt, has been followed by Web companies such as Zynga Inc, Groupon Inc and Facebook.

The creation of new non-voting shares will allow the trio to maintain control without risk of their stakes getting diluted when new shares are issued for employee compensation, acquisitions and other purposes.

"It's one thing for them to maintain it," CalSTRS' Hester Amey said of the Google founders' voting control. "But perhaps they should put their own capital behind it, instead of taking it out of the hide of the existing shareholders."

CalSTRS, which owns more than $400 million in Google shares, planned on "engaging" with the company about the move, as well as with other companies which may be tempted to follow Google's lead, said Hester Amey.

Some wondered whether the new non-voting Google shares, which will have a separate ticker, will trade at a discount to the company's voting shares. That's typically the case when companies have two classes of shares.

In Google's case, the voting shares don't benefit shareholders much, since the founders have majority control of the company. As a result, the premium on the voting shares is not likely to be as large as it normally would be, said Richard Roll, the chair in Applied Finance at UCLA Anderson School of Management.

Most analysts who cover Google shrugged off the planned stock split and said it merely perpetuated a two-tier system that has long given Google's founders majority control of the company.

"It's not inconsistent with how Google has been run in the past," said ITG Investment Research analyst Steve Weinstein. "You, as a public investor, are just along for the ride."

Google attributed a 12 percent drop in its cost per click (CPC) for the first quarter to a shift to cheaper mobile advertising rates among other factors.

Google explained the reasons for the decline on a conference call with analysts, but that may not comfort bearish investors, BMO Capital Market analyst Daniel Salmon wrote in a research note.

"Mobile is increasingly an area of concern. Google has roughly 90 percent share of mobile search, but this revenue must be shared with OEM handset manufacturers and carriers," said Benchmark analyst Clayton Moran.

The fall in ad rates follows an 8 percent decline in the fourth quarter of 2011.

Barclays analyst Anthony DiClemente, however, said he was less concerned by this decline than others as cost-per-clicks was only part of Google's revenue growth prospects.

"(We) are of the belief that CPCs will improve over time as Google's core search business will monetize well on mobile devices," he said in a note.

Analysts also said the uncertainty around Google's plans for Motorola Mobility may pressure its shares in the near term.

"These results bode well and keep us positive on Google long-term, all the while recognizing that the lack of clarity around MMI is likely to remain an overhang on the stock short-term," Jefferies & Co analysts, led by Youssef Squali, said in a note to clients.

The stock, which fell 9 percent after Google's fourth-quarter results on January 19, has risen 2 percent since then.