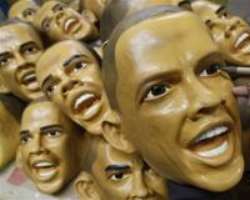 All around the world, everybody seems to want a piece of Barack Obama.

As souvenir vendors across the globe try to capitalize on the interest generated by the U.S. president-elect ahead of his inauguration this week, a Japanese factory is churning out Obama face masks to sate unprecedented demand.

The Ogawa Rubber Inc factory, north of Tokyo, said it had produced and sold more than 2,500 Obama face masks since December, and 1,000 more are being manufactured, making it their fastest selling product.

The factory, which stocks various masks of politicians and celebrities, said the Obama mask was expected to soon outsell its current best-seller, a mask of Japan's popular former prime minister, Junichiro Koizumi.

"I believe that unlike Japanese politicians' masks, Obama's mask radiates something that grabs people's hearts. I think many people do feel that energy," said executive director Takahiro Yagihara. The mask is sold for some 2,200 yen ($24) at toy and costume shops across Japan.

From Mexico to Moscow, companies are rolling out special Obama merchandise, hoping that the first African-American president in U.S. history, who is struggling to revive an ailing economy, will boost their own finances.

The souvenirs on offer include Obama Russian nesting dolls, T-shirts with Obama's image wearing Orthodox Jewish garb with the slogan: "Don't worry - be Jewish" and a limited-edition Kenyan "Obama" beer.