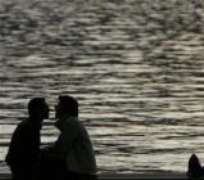 Women with high levels of estrogen not only look and feel prettier -- but they may act on those feelings by moving from man to man, U.S. researchers reported on Tuesday.

Dr. Kristina Durante of The University of Texas at Austin and colleagues found that young women felt more attractive when they had high levels of an estrogen known as estradiol, and they acted on those feelings.

"Women with higher estradiol reported a greater likelihood of flirting, kissing and having a serious affair with someone other than their primary partner and were marginally more likely to date another man," Durante's team wrote in the Royal Society Journal Biology Letters.

"Results provide support for the relationship between physical beauty and fertility and suggest that women high in reproductive health engage in opportunistic serial monogamy -- being open to affairs and moving on to a new relationship if a higher-quality mate becomes available."

Durante's team tested 52 female undergraduates aged 17 to 30 who were not taking hormone contraceptives. They took two estradiol samples from each, as hormone levels fluctuate from week to week.

They had the women rate their own attractiveness and showed their photographs to others to rate, as well.

"High-estradiol women were considered significantly more physically attractive by themselves and others," Durante and colleagues wrote.

The high-estrogen women also reported more sexual behavior -- especially outside of a relationship, although it was not linked to one-night stands.

"Our results are consistent with the possibility that highly fertile women are not easily satisfied by their long-term partners and are especially motivated to become acquainted with other, presumably more desirable, men," they concluded.

The findings fit in with many other studies showing that hormones influence the behavior and success of both men and women. Earlier this week, U.S. and British researchers showed that male financial traders whose finger lengths indicate high testosterone levels in the womb made more money.