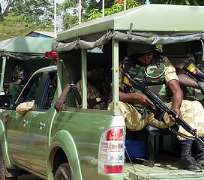 MAIDUGURI, April 11, (THEWILL) - Five people — three civilians, a policeman and an immigration official — have been confirmed dead following an early-morning attack by members of the Boko Haram Islamist sect in the north-eastern town of Maiduguri on Wednesday, according to security agents.

Confirming the death of the two uniformed men, spokesman of the Borno State Police, Samuel Tizhe disclosed that the attack occurred in Banki, a city bordering the country with Cameroon. He said that the gunmen attacked a police station using assault rifles and explosives, and killing a police officer and an immigration official.

Also confirming the incident through a special release, spokesman of the Joint Task Force (JTF) in the state, Lt. Col. Sagir Musa said: “Banki Police Station, and the Immigration and Customs outposts were attacked yesterday (Tuesday) night between 0700 and 0945 hours in Banki town by suspected gunmen. They shot sporadically to cause panic before moving to attack the formations, burning down the Immigration and Customs outposts.”

He further disclosed that unconfirmed numbers of rifles were recovered from the gangsters, who also damaged private vehicles. But he said that they were repelled in their attempt to raze the police station in the town.

“Three civilians, a police officer and an immigration officer died in the attack,” he said. “The gunmen came in a saloon car and shot sporadically with AK47 rifles. Their saloon car and AK47 rifles were recovered. The situation has been brought under control, and normalcy has been restored to the town.”