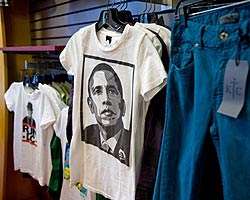 From beer to ice cream, lapel pins to T-shirts, if it has anything to do with US president-elect Barack Obama, it's selling like hotcakes as people everywhere snap up souvenirs marking his inauguration.

"So many people want a memento of this historic time," Ann Hand, a jewellery maker in Washington who has made a collection of accessories to commemorate Obama's swearing-in on 20 January, told AFP.

Hand offers cufflinks featuring the red, white and blue 'O' logo of the Obama campaign, a necklace reprising Obama's "Hope" theme, sunglasses encrusted with Swarovski crystal to spell out the name of the 44th US president, and half a dozen other jewellery items.

None come cheap, but even in a slumping global economy, demand has been so strong that many of the accessories are on back order.

"Everything is selling better than I expected. We're doing a lot of overseas orders — Hong Kong, Norway, Sweden, Singapore, Japan, Britain. We've never had that before," Hand, who has been in business for 20 years, said.

"It's really wonderful to know that people overseas want our president's lapel pin," she said.

A shop selling official Obamabilia opened on Saturday in Washington, offering items like a T-shirt, featuring artist Shepard Fairey's iconic rendering of the president-elect under the words 'Be the change' for $30, and a small wooden train with the inaugural seal for $22.

A Diane von Furstenberg tote bag was selling for $70, and an organic cotton black T-shirt by Donna Karan for $45.

'We've been swamped'
"We've been swamped. I can't even keep things on the shelves," said shop manager Joe Reid, as Washington resident Deborah Watts left the shop with badges, pencils and a long-sleeve T-shirt.

"It's a little pricey, and the pencils are downright overpriced at two dollars a piece," Watts told AFP.

"But I had to come and buy something official to remember this by," she said.

Claudia Jeanette, of Michigan, bought one of the wooden trains and a plastic blue piggy bank for her grandchildren.

"What's funny is my husband works for a bank in Michigan, and they give the exact same piggy banks away for free when people open a new account," she told AFP.

Obama fans can drink to and lick in the new president, too.

The Capital City brewery is serving Inaugurale beer at its brasseries in Washington, including one in the shadow of the Capitol where Obama will be sworn in.

Ben and Jerry's has borrowed Obama's 'Yes we can' campaign slogan and rolled out Yes Pecan ice cream.

The official souvenir shop was offering a china plate for $82, a beer stein for $15, and stem-less wineglasses which could easily double up as dessert cups and hold a scoop of Yes Pecan ice cream were going for $40 for a set of four.

Also available online?
The official souvenirs are available online too, and fans who don't want to spend $82 for a commemorative plate could always go for the Obama victory plate.

This "piece of fine porcelain with 22-karat gold trim" will remind proud purchasers for years to come of Obama's "comforting smile and kind eyes," according to the announcer who sells the victory plate in a television ad that has spawned a series of spoof infomercials on YouTube.

Marvel Comics will next week release the 583rd adventure of the Amazing Spider Man — featuring Obama.

Marvel decided to publish the Obama meets Spidey comic after learning the soon-to-be president of the United States is a long-time fan of the web-spinning super hero.

"A Spider-Man fan moving into the Oval Office is an event that must be commemorated in the pages of Amazing Spider-Man," said Marvel editor-in-chief Joe Quesada.

The Washington Times newspaper will publish a special inaugural keepsake edition on 21 January that will include "messages of hope" sent by readers to the new president.

But one of the most affordable and useful souvenirs will be Washington public transportation system's permanent fare ticket, or SmartCard, featuring a smiling Obama.

Obama SmartCards went on sale in Washington this week, and Asian-American Johnny Chui was one of hundreds of people who queued to buy them.

"My wife called and told me to get here and buy one for everyone in the family," Chui told AFP after parting with $40 for four Obama SmartCards.

Demand for the micro-chipped fare cards, which holders can add money to and use indefinitely, has been so great that another 140 000 have been ordered from the German company that makes them, Metro spokesperson Cathy Asato said.