GOV AKPABIO'S PHANTOM 'UNCOMMON TRANSFORMATION' AND THE HORNS OF HIS CRITICS 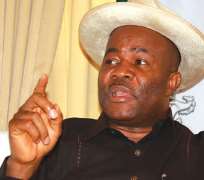 For the uninitiated, "REVIEW" in the local parlance means to re-award the contract of a project .It is a conduit for siphoning taxpayers’ money in this part of the world. It is caused by inconsistency in government policy and of course greed .A new government takes over a project that was initiated by its predecessor and decides to bring in its own contractor to take over the project. It is an anomaly and impediment that has always scared investors from investing in our highly volatile political system. The Gov. Godswill AKPABIO government has reportedly been effective with this strategy. Contracts for the LA Meridien Hotel, Ibom Airport, and Ibom Power Plant that was initiated by the ATTAH administration which AKPABIO served in were all "REVIEWED". AKPABIO allegedly accused ATTAH of mindlessly looting the State, and hence ATTAH was reportedly "sent" to "political Siberia" without trial. I want to state categorically, without fear of equivocation, that the IBOM TROPICANA which is AKPABIO's FLAGSHIP is a monumental misplaced priority. All over the world today, various governments are embracing private public initiatives (PPP) to ensure, reduction of expenditure by government and effective and efficient management of organisations since we know that managing public organisations is cumbersome.

It is absurd and weird AKPABIO could not get investors to build an entertainment centre in AKWA IBOM .It is indeed an irony, AKPABIO’s contractor for the TROPICANA, SILVERBIRD LTD (managed by Ben Bruce), has built similar projects in LAGOS and ABUJA with its own fund. So, WHY didn’t AKPABIO invite Ben Bruce to do same in AKWA IBOM ,but quickly awarded him a contract of close to 50 billion naira .There is a temptation to think TROPICANA is an orchestrated conduit for siphoning our collective wealth.Who will manage TROPICANA at the end of the day? Is it public servants WHO are known to be kleptomanaics and mindless looters? Will AKPABIO hand over TROPICANA to SILVERBIRD to manage in a kind of concession arrangement? Will it be sold to AKPABIO’S supporters at the end of the day? Only time will tell. IBAKA DEEP SEA PORT, according to you will be built in partnership with the federal government.

This may happen after the tenure of the AKPABIO’s administration has elapsed, if one is to take cognisance of bureaucratic bottlenecks that is usually associated with the federal government. Again, it is shame AKPABIO with all his "uncommon transformation" cannot partner with the ever willing private sector. All the major projects of FASHOLA in LAGOS are Private Public initiatives (PPP) .E.G LEKKI-EPE EXPRESSWAY, ORILE-IGANMU ROAD/RAILWAY, EKO MASS TRANSIT, EKO ATLANTIC CITY, etc… Why are investors afraid to touch AKPABIO with a long pole? Perhaps AMAKPE REFINERY will always be an albatross and serve as a reminder of the alleged despotic tendencies of “MR DIGITAL”.

That is why massive employment generation in AKWA IBOM, will continue to be a mirage that is pursued but never attained. Having realised this, AKPABIO reportedly went cap in hand to solicit for 1 billion dollars from the Capital market for industrialisation. What an irony! I was in EKET recently during VANGUARD FOR SOCIAL CHANGE tour to observe political and economic activities in AKWA IBOM. Electric power supply was epileptic. In fact, when we discovered that AMAKPE refinery would have brought massive development to EKET. We also discovered that words have spread around EKET that TEAM AMAKPE are SCAMMERS. We had to counter this by providing the last press release of TEAM AMAKPE. There is a speculation in AKWA IBOM that the E-LIBRARY is empty, so i could not go there for my research work during my last tour. If you have contrary views, please kindly provide pictures to support your argument.

SUMMARY
IBOM INTERNATIONAL AIRPORT: ---uncompleted after 5 years of AKPABIO’s administration. Every other year, the contract of the project is “REVIEWED”.

IBAKA DEEP SEA PORT- appears to be another “AJAOKUTA STEEL” Project which allegedly has been a conduit for siphoning public money. A lot of investors have ran helter-skelter from IBAKA DEEP SEA PORT because they doubt government sincerity and consistency in government policy (AMAKPE REFINERY is a case study).Before Nigerian ports Authority NPA came into the picture, CAPITAL OIL LTD was paraded and celebrated as a partner that will build IBAKA DEEP SEA PORT. At the end of the day CAPITAL OIL LTD ran away just like other investors. It is a paradox; the AKPABIO administration has NOT been able to attract a SINGLE investor despite substantiated claims of “UNCOMMON TRANSFORMATION”.

IBOM POWER PLANT:-despite the fact that a 38 MILLION DOLLARS contract was awarded to SEPTA ENERGY for gas supply by the AKPABIO government, power supply is still epileptic in AKWA IBOM .Political hawks are saying the problem lies with the federal government who holds the monopoly of electricity distribution. But why award a contract when you know you have constitutional constraints impeding you from electricity distribution?

IBOM TROPICANA: is a 50 billion naira colossal misplaced priority that was expected to have been commission since last year .People are hungry and jobless, and AKPABIO is building an entertainment center, where workers who are NOT paid regularly are expected to go watch movies.

E-LIBRARY:--a monument that has no economy value, if one should take cognisance of the prevailing economic meltdown. I have not seen a beehive of activities there.

GOOD ROADS: It is only in AKWA IBOM State that roads are built at 2.3 billion naira per kilometre