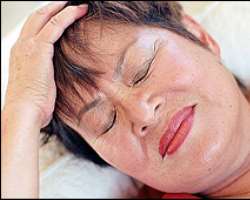 Dementia is more common in women
Listen to article

Scientists have found a genetic risk factor for late onset Alzheimer's disease which is carried only by women.

The discovery is the first evidence to suggest that genetics may partly explain why more women than men tend to develop the disease.

The key variant was found in a gene on the X chromosome, of which females have two copies, but males only one.

The study, by the US-based Mayo Clinic College of Medicine, features in the journal Nature Genetics.

The Mayo team carried out a detailed genetic analysis of patients with Alzheimer's diease.

They identified a particular variant of a gene called PCDH11X which appeared to be closely linked to a higher risk of the disease.

However, further analysis showed that the association was almost entirely restricted to women.

The raised risk of Alzheimer's was not statistically significant in men who carried one copy of the rogue gene variant, and only marginally so in women with just one copy.

But the raised risk was much more significant in women who carried two copies - one inherited from each parent.

Cell communication
PCDH11X controls production of a protein called a protocadherin, part of a family of molecules that help cells in the central nervous system to communicate with each other.

Some evidence has suggested that protocadherins may be broken down by an enzyme which has been linked to some forms of Alzheimer's disease.

Lead researcher Dr Steven Younkin said it was likely that many genes contributed to the overall risk of Alzheimer's, and that age was probably a more significant factor.

He said: "It is exciting to find a new gene for Alzheimer's, particularly the first that has a gender-specific effect, but we have a lot more work to do to resolve the complex genetics of the disease."

Rebecca Wood, of the Alzheimer's Research Trust, described the research as "important".

She said: "Finding genes associated with Alzheimer's will tell researchers about the biology of the disease, which could lead to new treatments being developed.

"At present, the cause of Alzheimer's is unknown, but it is likely that a mixture of environmental and genetic factors is involved.

"Two thirds of people with dementia are women, but this is partly because women live longer and risk of developing dementia increases with age."

Neil Hunt, of the Alzheimer's Society, said research by his organisation showed that twice as many women than men over 65 have dementia.

"It is likely that a combination of factors cause Alzheimer's disease. Genetics play a part, but whilst dementia isn't a natural part of ageing, age is the biggest risk factor."

It is estimated that 700,000 people in the UK have dementia.