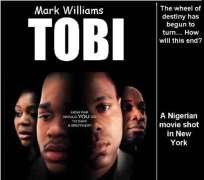 As the prestigious Africa Movies Academy Awards (AMAA) continues to draw closer, Nigeria's U.S-based award-winning actor, Chet Anekwe has joined the list of prominent actors, actresses, directors, producers and many others in the film-making business who have earned a place in the list of nominees for this year's event scheduled for April 22, 2012 at the Expo Hall, Eko Hotel and Suites, Victoria Island, Lagos.

While the talented actor received his nomination spot in the AMAA for his role in the movie Unwanted Guest, his sterling performance in the movie, TOBI, which is expected to premiere in Nigeria on May 18, 2012 has equally earned him rave reviews in print, online and electronic media.

On May 18, 2012, Chet Anekwe who also played a prominent role on Monique's 'Phat Girls' will be joined by other American and Nigerian stars on the red carpet of the official premiere of TOBI, which will take place at the Ozone Cinema in Lagos, Nigeria.

A lot of Nigerians both at home and in the Diaspora have expressed their excitement at Chet's ability to pick up a nomination spot for AMAA and made it clear that even if he does not win, a nomination spot shows that he could have gone ahead to win.

One of those who spoke to Simply Samad Media includes the Director, Unwanted Guest, Daniel Ademinokan and he could hardly conceal his excitement.

“I am extremely happy about it. Chet is an amazing and incredibly talented actor. His performance in the movie, Unwanted Guest was breath-taking. He brought a lot of life and realism into the picture and deserves to be not just a nominee but a winner.

Chet was nominated for Best Actor in a Leading Role in Unwanted Guest and while fans wish he takes home the AMAA crown, many others eagerly anticipate nothing short of another sterling performance from the actor in TOBI when the movie officially premieres in Nigeria on May 18.

The producer of the movie, Emmanuel Ijeh has assured that plans are in top gear to ensure that the Nigerian premiere of TOBI lives up to expectation in every sphere.

TOBI was premiered at Tribeca Cinemas in the United States last year and has done very well; with some veterans in the cinematic field showering encomium on Ijeh.

The movie centers around the life of 21-year-old Tobi Akinola (Mark Lavan Williams) who deviates from the upright path his parents (Chet and Chisom) once guided him along and yields to the tempting antics of the dark side; giving in to the allure of a gangster life… and then a grave mistake occurs on the streets, which threatens his very existence.

His brother, (Jimmy Allen); a handsome and outstanding lawyer is torn between loyalty to his dream firm, 'Lourdes & Myers;' where he has now been employed and defending his brother on the other hand – in a case where Tobi's life hangs in a balance. He must take a stand that would shake the proceedings to its very roots…

The movie boasts of the deployment of first class legal battle antics beautifully woven into the court room scenes by Emmanuel (we haven't seen such since the days of Matlock on TV; especially from Nigerian scriptwriters/filmmakers, romance, outstanding production incorporating good storylines, twisty plot, lovely cinematography, non-sloppy editing, powerful sound with its effects cued in at the right time, lighting principle adhered to, a good cast playing their roles with dexterity. It's a thought provoking, socially/morally transforming, intellectually stimulating, visually opulent, captivating and interesting movie set to take the Nigerian box office by storm.

The movie also offers a peek into how deep the bond of brotherhood goes and the sacrifices that come with it.