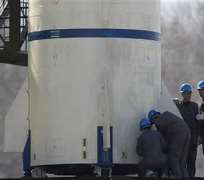 Isolated and impoverished North Korea said on Tuesday it was ready to go ahead with its proposed long-range rocket launch, an announcement that sparked immediate condemnation from South Korea and Russia and a plea from China, its main ally, for calm.

The launch of the Unha-3 rocket, which North Korea says will merely put a weather satellite into space, breaches U.N. sanctions imposed to prevent Pyongyang from developing a missile that could carry a nuclear warhead.

Russia, a former backer of North Korea which has boosted economic ties with Pyongyang, denounced the program.

North Korea defended the launch as a sovereign right.

"The weight of our satellite is 100 kg. If it was a weapon, a 100 kg payload wouldn't have much of an effect... Our launching tower is built on an open site," said Ryu Kum-chol, vice director of the space development department of the Korean Central Space Committee.

Ryu said that the rocket assembly would be complete on Tuesday.

The launch is set to take place between Thursday and next Monday around the 100th birthday celebrations of the founder of North Korea, Kim Il-sung, whose grandson, Kim Jong-un, now rules. Kim Il-sung died in 1994.

"The launch of the Kwangmyongsong-3 satellite is the gift from our people to our great leader, comrade Kim Il-sung, on the occasion of his 100th birthday, so this cannot be a missile test," Ryu added.

The West says the launch is a disguised ballistic missile test by a country which walked out of so-called six-party disarmament talks three years ago.

NUCLEAR TEST ALSO PLANNED, SAYS SOUTH
South Korea, which remains technically at war with the North after their 1950-53 conflict ended with a truce rather than a treaty, warned Pyongyang it would deepen its isolation if it went ahead with the launch.

Security sources in Seoul, citing satellite images, have said that North Korea is also preparing a third nuclear test following the rocket launch, something it did in 2009, a move bound to trigger further condemnation from the West.

"It is disappointing that the North is forcing its people to endure sacrifices with this provocative action and is bringing isolation and sanctions to itself from the international community," the South's Unification Ministry said in a statement.

The rocket will bisect a sea that separates South Korea and China and its flight path will take it towards the Philippines where a second stage of the rocket is due to come down in waters close to the archipelago.

China, which backs North Korea economically and diplomatically, reiterated its pleas for calm and said it had "repeatedly expressed its concern and anxiety about the developments," Foreign Ministry spokesman Liu Weimin told a press briefing in Beijing.

The prospect of a North Korean rocket launch has alarmed Japan, which was overflown by an earlier rocket and said it would shoot it down if it crossed its airspace.

"I think a message needs to go to the North Koreans," he told reporters. "You have a new leader, there's an opportunity to take a new path. This is a country incapable even of feeding its own people, that needs to change its approach."

News that the launch would proceed on time hit South Korea's currency, the won, which eased a little, but the stock market had already closed.