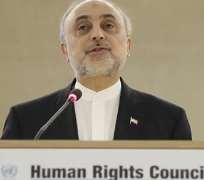 "Setting conditions before the meeting means drawing conclusions, which is completely meaningless and none of the parties will accept conditions set before the talks," the Iranian parliamentary news agency quoted him as saying.

U.S. officials say that getting Iran to suspend high-level uranium enrichment and close a nuclear facility built deep under a mountain near the holy city of Qom are priorities for the nuclear talks between Iran and world powers, which are set to resume in Istanbul on Saturday.

"These issues have been raised by the media and we cannot base our judgment on those concerns reflected by media coverage," Salehi added.

He said the Iranian negotiating team would ignore those reports and defend its position in the talks.

"We have our opinions and the P5+1 have theirs but we have to find common areas."

The United States and its allies hope to be able to strike a deal with Iran over its nuclear program which they suspect is being used to covertly develop a nuclear weapons capability.

Iran maintains its activities are entirely peaceful and has so far refused to suspend enriching uranium.