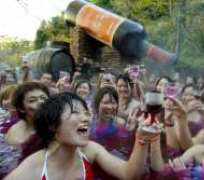 Two separate research groups have released findings that might confirm what you may know: Laughter and red wine and a handful of walnuts or peanuts are the best longevity, disease-fighting and anti-aging secrets out there.

Reports from the Montefiore Einstein Cancerdefine Center at Montefiore Hospital are that they have been using 'strength through laughter' therapy to cure patients for the last five years.

During the laughter therapy session, the patients crack each other up and laugh to forget their own illness; they also use good film comedies, books and stand-up specials during the session.

The Saturday Review editor, Norman Cousins, noted laughter therapy in his book 'Anatomy of an illness'. He shared his experience about how laughter therapy helped him. He wrote, “I made the joyous discovery that 10 minutes of genuine belly laughter had an anesthetic effect."

To add to this news, Harvard researchers have made claims they have a critical key to unlock the secret of aging.

Their paper published in this week issue of the journal Cell is the latest to tout sirtuins, proteins involved in the aging process.

Sirtuins maintain a youthful pattern of gene expression by ensuring that the genes that should be “off” remain silent. The same proteins appear to also repair DNA damage as we age, Harvard researchers found.

“The critical protein controls both which genes are off and on as well as DNA repair; it's used for both processes, and that's the catch,” said Sinclair in a statement.

Chromosomes get damaged as we age, and the SIR1 proteins can't handle both jobs as well.

The Harvard scientists have found evidence that the aging process can be slowed. They discovered that mice with more SIRT1 proteins have an improved ability to repair the DNA and to prevent the unwanted changes in the gene expressions.

The magic bullet is resveratrol, a chemical found primarily in red wine, which helps to activate the SIRT1 protein, which aids in the repair of broken chromosome.

The studies showed that resveratrol also found in the crust of peanuts and walnuts, in grapes, peanut butter, pistachios and other foods seemed to ward off the effect of age on heart, bones, eyes and muscles of mice, improving conditions such as cataracts, osteoporosis and poor motor coordination, conditions that are also making the elderly frail.

The chemical reduces the onset of degenerative diseases of aging, such as Alzheimer's.