Insight: In Bangalore, A Remake To Avoid Being 'Bangalored' 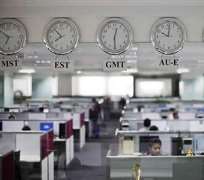 Rajesh Rao is among a handful of Indian entrepreneurs who may prevent the country's software industry from getting "Bangalored".

The 41-year-old self-confessed geek runs Dhruva, a firm that sells content and services to global online game companies from a bungalow in a crowded suburb of a city that has come to embody outsourcing and the transfer of jobs from the West.

But plain vanilla outsourcing - help desks and back office operations - is finding cheaper locations abroad. India's software industry has discovered it needs to move up the value chain or enter niche areas like gaming to continue growing.

Rao, a dapper man with a soul patch beard, was drawn to multimedia computing while at university and set up his own firm. He progressed to video gaming and says he lucked into a sector that is now realizing its potential. It is less than a $500 million business in India - and $50 billion worldwide and growing.

"Whenever something transcends from a geek activity to an everyday activity, that's when you can say that this is now going to become mainstream," Rao said at his unpretentious headquarters set amid shops, a temple, a women's college and cheek-by-jowl homes.

As gaming scales up, the advantages of outsourcing are becoming apparent to the firms on the U.S. West Coast that dominate the sector. Jobs that can cost up to $12,000-$15,000 per man-month there can be outsourced to companies in India like Dhruva for about $4,000-$5,000.

"The gaming industry began to discover the benefits of outsourcing, and we were already there, and so we started seeing a huge upswing in business," Rao said, speaking in a new office, set up as he expands staff. Many of the desks are unoccupied and cabling has yet to be completed.

"We are now beginning to see that big wave. Pretty much the floodgates are opening."

San Francisco-based Zynga, which started off games like FarmVille and Mafia Wars on Facebook, has also bet on Bangalore, setting up an office and a creative studio, the first outside the United States, with over 200 employees. Thomson Reuters itself has more than 6,000 staff in technology, sales, editorial and customer support in Bangalore.

"I see Bangalore going through a pyramid, where you started with lower-value functions like call centre work, then it moved up to BPO (business process outsourcing) and more strategic IT projects, but still very directed work," he said in a telephone interview. "At the top of that is product development. That is just getting critical mass in Bangalore."

THE UPGRADE
India's IT industry, with Bangalore firms forming the largest component, is now worth an annual $100 billion and growing 14 percent per year, one of the few bright spots in an economy blighted by policy stagnation and political instability.

But growth has tapered off from 20 plus percent a few years ago. Rising wages, uneven infrastructure and a talent pool that doesn't fully meet requirements are other worrying factors.

Technology and special skill-sets are the answer, analysts say. Indian companies are now into engineering services, alternative business models and bio-technology as well as animation and gaming. Many will offer increased revenue in addition to cost savings.

"Gaming, product development, the D of R&D (research and development), applied research, engineering and design - you can see all forms of these emerging in India," said Noshir Kaka, managing director of McKinsey and Co's India operations.

Around the turn of the century, the confluence of better communications and fiber-optic networks, a pool of software talent and government incentives for the IT industry made Bangalore the global hub of outsourcing.

It started mostly as a low-cost way of dealing with issues like the Y2K bug, but it then fundamentally began to alter international business. Companies in the West began to relocate hundreds of thousands of jobs to India.

In 2008 alone, companies in the United States and Europe saved over $20 billion by outsourcing services to India, according to a McKinsey report.

Once called a pensioners' paradise, a favored retirement spot for army and government officers, Bangalore became one of only two cities in the world to have a verb derived from its name (the other is Shanghai). Getting Bangalored came to mean losing a job to outsourcing.

Hyderabad, a rival outsourcing-focused city 550 km to the north, began to be called "Cyberabad".

But as incomes rose, low-value jobs like call centers and help desks began to make the transition to even cheaper locations like the Philippines and Eastern Europe.

Part of the answer, says B.V.R. Mohan Reddy, the founder of Hyderabad-based engineering services firm Infotech, is a "leap-frog" in technology.

"So far this business has been very linear. As more technology, maturity and confidence come into this industry, you will certainly find people ... moving to the next plateau."

Infotech, with estimated revenue this year seen up 22 percent at $250 million, is among the most technically advanced firms India, providing services like computer-aided design for aircraft engines and digitalization of drawings and maps.

"We do participate with our customers at this point of time," said Reddy in a phone interview. "Though we are a services company, our engineers' names have started appearing in the list of patents."

Firms like Infosys, India's $6 billion outsourcing giant, are moving up the value chain in their own way and switching from traditional markets in the United States and Europe.

"We are looking at new areas like embedded systems, we have accelerated our consulting growth, we have focused on emerging markets much more," said founder N.R. Narayana Murthy, a legend in the industry.

"We have enhanced involvement in the digital economy; health care is a big area of opportunity," he said in an interview at the sprawling Infosys headquarters in Bangalore.

THE TALENT POOL
The limiting factor is a shortage of job-ready engineers, with companies willing to pay a premium for workers who have proved themselves in other IT firms. But that adds to costs and risks making companies uncompetitive, or doing to them what they have done to companies in the West.

Infosys solves the problem by trawling universities for graduates and then training them for up to eight months. Talent shops, where industry-ready skills are taught, have emerged elsewhere.

"From so-called bodyshopping in the software industry in the 80s and 90s, now we have come to a stage where complete R&D outsourcing is happening," said J.A. Chowdary, who runs Talent Sprint, a company that provides training to IT professionals.

"This calls for a huge jump in quality manpower. Many engineering colleges are able to produce students, but Nasscom (National Association of Software and Services Companies) says only 20 percent are employable. So there's a big shortfall."

Other estimates say only about a quarter of the 770,000 engineering graduates each year are ready to join the workforce. Another quarter needs training and the rest will take on non-software jobs or remain unemployed.

Because the numbers are so huge, India's IT sector will continue to grow, albeit at a slower pace. But Srini Raju, who runs the Peepul venture capital fund aimed at the IT sector, said Indians by and large lacked the innovation and entrepreneurship skills to bolt on to talent and technology to make cutting-edge products themselves.

"There's no hunger," he said. "I am not saying they are not hard-working. The sacrifice and hunger are not there.

"In the West, they would have slept in their office for a week together. Here at 5 o'clock in the evening they start getting phone calls. I am not saying this is right or wrong. That is the way this society is. India is not a country for innovation any time soon."

Raju said he had about $700 million invested in Indian companies, but mostly in service providers.

"I will not invest in innovation," he said. "I will invest in do-ers. You can build businesses around do-ers. Around innovation, no. It's a lack of people who will do it."

Narayana Murthy at Infosys dismissed talk of a perennial lack of innovative talent and said India would one day produce an entrepreneur like Steve Jobs.

"It's impossible for me to predict what the Indian Steve Jobs will do," he said. "But I am sure there will be one. Let's remember our story is still pretty young. Innovation will come."