To Google Or Not To Google 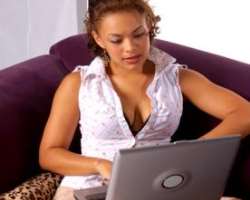 Should I, shouldn't I? Will I, won't I? Do I, don't I? I had already gone on four dates with Alan so I. decided to take the plunge with him. I. googled him. I would have done it earlier but I'm superstitious and believe that googling someone before a first date brings bad luck to the relationship. Besides, it's nice to go on a date anticipating what the person is like—will he like the same flavor ice cream that I do, does he still watch Saturday morning cartoons, what's his opinion on the state of current world affairs…? The results of my Google.detective work were great. Everything Alan had told me about his life was true: he was an architect, and his mother used to be a manager for a now forgotten African percussion instrumentalists. I could have stopped there and moved on but I craved juicier information so I decided to take a more extensive journey on the information superhighway.

On our first date Alan told me he attended an Ivy League university for his undergraduate studies, armed with that useful piece of information I searched for websites that contained his name along with his undergraduate university's name. The first site revealed that Alan was part of an environmentally conscious advocacy group in.college—this was great news, he cares for the planet! What a sweetheart. The next site was a photo album for the Kappa Gamma Sigma fraternity. Alan did not mention anything about being a member of a fraternity. I didn't want to be judgmental just yet. After all, not all fraternities are the same. Some fraternities are all about partying, drinking,.and hooking up with women but there are some that foster brotherhood, the pursuit of intellectual excellence and community service. The latter are far and few between, but I figured that Alan probably fit into that category. The first photograph: a group shot of the fraternity. What a nice looking group of men—nothing suspect in that. The next.photograph: two guys drinking from a beer keg with the caption “race to the bottom” typed at the bottom of the page. Alan was not involved in that debauchery, no big deal. .As I flipped through the photo album things went from okay to bad: a photo of Alan making out with two women with the caption “P.I.M.P.” ... another . photo of Alan mooning the photographer—these were not the circumstances under. which I expected to see his butt, but at least he had a cute one. I started second guessing everything about Alan. Was he really who he claimed to be?

I moved on to www.friendster.com and learned that among Alan's listed dislikes were “peanuts, feminists and reality TV.” Feminists!? Who was this guy? I started second-guessing everything I said to him on our first four dates. .Did I tell him that the only thing I can cook is groundnut stew, a meal that obviously includes peanuts?. I had definitely told him that I wanted to be a human rights lawyer and advocate for women's rights.. What should I make of the fact that . the majority of his friends listed on www.friendster.com are women who looked like models.. There's Jamila, a Scorpio who says she lives up to her zodiac sign's reputation for being a passionate lover.. Then there's Afua who's a medical student who aspires to find a cure for AIDS someday.. I didn't want to compete for Alan's affections with these smart . model-looking women! I wondered which women had Alan dated in the past? Which ones was he just friends with? Which ones was he hoping to get with? I wanted to ask Alan about the fraternity photos, the aversion to feminists, and his friendster buddies Jamila and Afua, but there was no way I could. bring it all up to him without mentioning that I had e-snooped on him? I wish I could. just erase everything about Alan but I was in too deep and knew too much.

E-snooping is now standard dating practice—just like you pick out a cute outfit days in advance and get your hair and nails done, you google a person. And who can resist? I know my friends and I can't E-snooping seems so harmless, the online equivalent of peeking through your date's medicine cabinet when you use the bathroom at his place. But e-snooping can also reveal information too soon and cause you to have an unfair

prejudiced opinion about your date—it's a surefire way to find a reason to write-off someone before finding out who they really are. Don't get me wrong, sometimes googling someone can provide useful information, maybe the guy . you're dating was a convicted felon … in which case you should RUN the other way as fast as you can! But take what I found out about Alan; it was as though I was looking for something bad about him and once I found out something a little shady I was so ready to dismiss him without even giving him a chance to explain himself.

Months later I asked Alan about his college days and he explained his past behavior. It turns out his aversion to peanuts was only to eating peanuts alone and he doesn't mind a peanut flavor when it's mixed with something else, in . fact he loves my groundnut soup. And his listed dislike for feminists was the result of a stupid bet with his friend to see who could generate the most hate mail through their Friendster profile; he quickly changed his profile once the bet was over. Alan confessed to looking me up on www.friendster.com and being intimidated by my male friends. It turns out . that both of us were undercover e-snoops! I've given up my online detective work; now I find my joy in learning things about Alan the conventional way: by talking to him. . Sometimes searching for something only reveals a truth that we have always known.