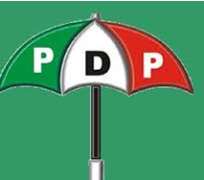 He gave the endorsement at a meeting of Edo South senatorial district of the party, which held in his house in Benin.

The meeting also resolved to reaffirm the national leadership status of Ogbemudia.

'After reviewing all other issues and problems facing the party, it was resolved that the senatorial district has no single grudge against any person or leaders within and outside Edo South Senatorial District.

'The Edo South PDP wishes to appreciate and thank all leaders and members of the party in other senatorial districts for giving Edo South Senatorial District the privilege and support in producing the governorship candidate in the last governorship primary election held on February 25 at Dr. Sam Ogbemudia Stadium on the person of Major General Charles Ehigie Airhiavbere,' the communiquÃ© said, adding 'the Edo South Senatorial District has accepted and agreed for the total support of the candidature of Major Gen. Charles Airhiavbere in the forthcoming governorship election in Edo State.'

Speaking to newsmen shortly after the meeting, Airhiavbere said the endorsement started at the weekend when the traditional rulers in the district endorsed him.

'You can see the emotions involved and now the Edo South PDP leaders have endorsed me. It is reassuring that Edo State is going to have a rebirth and a transformation process. It is an indication that the state is moving towards transformation by November 12 when we take the leadership baton of the state.

'We are going to take Edo state to limelight and beyond the level where our founding fathers planned that our leaders have failed to retrace. It's a new beginning where leaders would leave up to their promises, leave up to requirement, the yearnings and aspiration of our people,' he said.