Mali Envoys In Nigeria To Seek Support For Junta 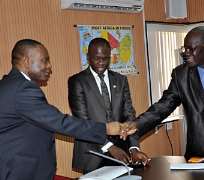 Talks between Mali’s new military rulers and regional powerhouse Nigeria broke up on late Tuesday without any breakthroughs on ending the junta’s rule.

A Nigerian source said discussions included the possibility of a negotiated end to the junta’s rule, but the talks at the foreign ministry in the capital, Abuja broke up without a deal being announced and it was unclear if further discussions were planned.

“The meeting is over and they have left the premises,” Nigerian foreign ministry spokesman Ogbole Amedu Ode said, providing no further details.

Discussions were held as pressure mounted on the junta following sanctions imposed by West African nations as well as a rapid advance by Islamist and Tuareg insurgents since the March 22 coup.

More than half of Mali has fallen to insurgents since the coup by a group of low-ranking military officers led by Amadou Sanogo over the government’s alleged failure to take action on the rekindled Tuareg rebellion in the north.

“We came here for a mission to tell the Nigerian authorities how the situation is in Mali,” Colonel Blonkoro Samake told journalists through an interpreter before his three-member team held talks with Foreign Minister Olugbenga Ashiru.

“With the authorisation of president Amadou Sanogo, he mandated us to come and see the Nigerian authorities to come and explain how the situation is in Mali,” referring to the leader of the junta that seized power.

A Nigerian foreign ministry source said discussions included the possibility of persuading the junta to relinquish power in exchange for some form of amnesty.

The source said a draft communique was being sent to the head of the junta in Bamako, Nigerian President Goodluck Jonathan and Ivorian President Alassane Ouattara, current chairman of the 15-nation Economic Community of West African States (ECOWAS).

“The proposal is to ask the president of the Malian parliament to drop his ambition to contest and assume the presidency of an interim government that will conduct an election,” he said.

However, foreign ministry spokesman Ode signaled later that a deal had not been reached, telling journalists a communique would not be issued on Tuesday and further “consultations” would have to be held.

It was not clear when or where such consultations would take place.

ECOWAS has placed an embargo on Mali which also cuts the putschists off from the regional central bank in Dakar, affecting their ability to pay public wages.

The bloc, whose headquarters is in Nigeria, will also put in place a military standby force, after earlier putting some 2,000 regional troops on alert.