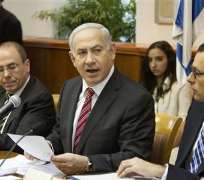 Israeli Prime Minister Benjamin Netanyahu overruled the planned eviction on Tuesday of Jewish settlers from a building in an occupied West Bank city that is flashpoint of tensions with Palestinians.

Some 20 settlers moved into the Hebron building last Thursday at night, seeking to expand a settlement of some 500 families in the heart of a biblical city overwhelmingly populated by Palestinians who regard Israelis as interlopers.

The settlers say they bought the two-storey structure from its Palestinian owner. This is disputed by Palestinian police. Citing the need to maintain calm, Israeli Defense Minister Ehud Barak ordered the settlers out by 3 p.m. (1200 GMT) on Tuesday.

"The prime minister has asked the defense minister to give the settlers in the building time to allow them the possibility of pursuing legal proceedings," an Israeli official said.

The rare veto of Barak, who heads the only centrist party in Netanyahu's religious-nationalist coalition, came a week after Israel's top court ordered the evacuation by August 1 of a West Bank settlement built without state approval, quashing bids by the government to talk its residents into leaving voluntarily.

Though politically strong, Netanyahu has faced questions within his Likud party and other right-wing coalition partners about his commitment to the settlers, many of whom see themselves as exercising a Jewish birthright to biblical land.

He is also under international pressure to revive peace talks with the Palestinians, who seek statehood in the West Bank and whose cooperation with the Israelis in the territory has been strained by popular rancor over settlement expansions.

About 500,000 Israelis and 2.5 million Palestinians live in the West Bank and East Jerusalem, areas which, along with the Gaza Strip, were captured by Israel in the 1967 Middle East war.

Most world powers deem the Jewish settlements illegal. Israel disputes this and has vowed to keep major settlement blocs under any eventual peace accord with the Palestinians.

A traditional burial site of the biblical patriarchs revered by Jews and Muslims, Hebron is especially fraught.

Zeev Elkin, a senior Likud lawmaker, told Israel's Army Radio the Hebron settlers had bought the disputed building "for a great sum of money, and therefore it is their right to live there".

But Ramadan Awad, chief of Palestinian police in the city, denied the validity of any such deal, saying the building had more than 50 owners. The Palestinian Authority, which has limited self-rule in the West Bank, outlaws the sale of land to Israelis.

"One of its owners sold his share to a Palestinian from Gaza presently in the West Bank, who was detained and held by the (Palestinian) security forces to investigate whether he sold it to settlers," Awad told Reuters. "Even if he sold that share, it represents only a small part of the whole house."

Asked when the settlers in the disputed Hebron building might now face eviction, a Barak aide declined to provide details, saying there were "operational considerations".