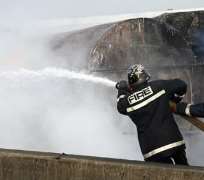 A tanker crashed then later exploded and caught fire in northern Nigeria, killing at least 12 people who had rushed to the scene to scoop fuel from the damaged vehicle, a local official said Monday.

As residents swarmed the crashed truck, a spark "led to a huge explosion from the tanker which killed 12 people," said Obana Jatau, the head of Ganigaku village in Adamawa state, where the accident occurred on Sunday.

He said the tanker had skidded off the road and overturned when the driver attempted to avoid a pothole. Local media said up to 30 people died in the fire, though the figure could not be confirmed.

Adamawa state police spokesman Nemuel Yoila confirmed the incident, but could not give details of casualties.

Petrol tanker accidents are common in oil-rich Nigeria, Africa's most populous nation where fuel is distributed with trucks on poorly maintained roads.

Residents often seek to take fuel from such accidents either for personal use or to sell on the black market in a country where most people live on less than $2 per day.

Last month, six people were killed and several injured when a petrol tanker caught fire on a road in the oil hub of Port Harcourt.