NATIONAL ASSEMBLY, HOW TO REDUCE PRISON CONGESTION CAUSED BY AWAITING-TRIAL INMATES IN NIGERIA 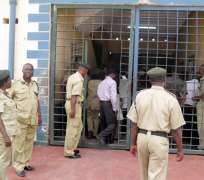 Over the years much have been said about decongesting prison population in Nigeria, yet the ever-growing population of people awaiting trials continues persistently.

It is believed that 36,217 or so out of a population of about 74, 000 inmates, are suffering at various prisons without undergoing trial for years. This is certainly no fault of the prison management.

The legislative arm of the government have had hearings on this national challenge, yet the Nigeria prison authorities remain helpless as their prisons remain dumping grounds for all sort of cases from the police and the courts. The current troubles of the entire criminal justice system of Nigeria which is a direct result of decades of out dated governmental and administrative policies keeps the police, prisons and the judicial continuously in a state of dislocation and lack of proper linkages in terms of functional roles and workable connections.

Consequently, the prisons have become overwhelmed with the pressures of overpopulation, congestion and destabilization.

The effects of congestion and of having overpopulated number of awaiting inmates as well as institutionalizing them along with convicted inmates make the Nigerian prisons grounds for developing psychological or mental health as well as physical ailments.

Our courts remain overburdened with no clear system of modern resolution-based placement systems as in incarceration, probation, community control, community supervision, home supervision, and other diversion or controlled alternative methods. As a result, our prison system is left in a state of chronic congestion, crowdedness and security risk.

It is a fact that the increasing number of mentally ill persons has continued to contribute to congestion of the courts and consequently the prisons. Yet the federal government continues to have no clear system of removing the severely mentally ill inmates from our overburdened prisons.

One common sense way to seek solution to the increasing prison congestion is to create policies that will assist in differentiating the meaning of a jail and its use as against the role of a prison.

There is a place for holding offenders awaiting trials for various crimes, they are called jails. The Nigeria correctional Service with adequate technical assistance, expert help, and special financial resources could open separate jails.

As it stands now there is currently a lack of unified jail/prison effectiveness with regard to utilization systems.

The jail in every rational and contemporary society operates on a short term basis, while the prison is all about long-term punishment.

By designation, jails are locally operated by municipalities or local councils, or even by private corporations in advanced countries but in the case of Nigeria the federal government could set up, manage or operate jails in various towns as it is currently the practice with prisons.

Jails are used to hold individuals waiting for trial, or in the middle of legal proceedings, and certainly, and they are not located within the prison environment.

Jails, in many cases, serve as settings for serving a short term sentence, such as 364 days or less than a year.

Usually, the prison, by designation, operates as a federal penal system where convicted felons (not misdemeanor convicts) are kept for at least a year or more.

Both jails and prisons are supposed to have up-to-date classification, therapeutic and mental health systems to help in the areas of general placement, re-entry of the mentally ill into the society and in the discharge of inmates.

On the other hand, the prison setting has minimum, medium and maximum custody levels for felons. Some convicts, who are almost completing their sentences in prison, could be placed in what are known as prison-operated halfway houses, community-based restitution programs and work release centers.

Also, it is essential to treat rather than punish the mentally disordered, terminally ill offenders and drug addicts in highly supervised mental health/home-based centers. There is no reason why the Federal Ministry of Interior cannot create jails, as extension of the police and courts to hold criminal violators awaiting trial, to house persons revoked of their probation status, or serve those under short term sentences.

Yes, there are going to be challenges in a society with a dysfunctional system of telecommunication, poorly codified street/home address and poorly-lit roads, adequate house arrest and probation systems. But we can try.

However, these alternatives to lock-up remain essential as they will make the correctional system function better financially, cost-wise and organizationally. These alternatives also help reduce the pattern of making prisons dumping ground or dumpsites, especially for those with little means or nuisance to families or society.

Note that if there are no improvements in our courts in terms of providing adequate system of court administration or record management, we will remain disorganized as such system helps to account fully for the status of a case, or to track a case up to the penal system.

The unbearable prison backlog for persons in the middle of legal proceedings will continue if the entire criminal justice system, the correctional system especially does not get the modern help it deserves from the legislature. No reasonable mind or government wants our prison system to remain an unsafe or inadequate place for managing inmates or convicts.