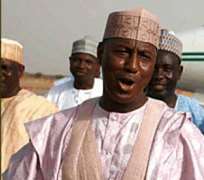 In a statement signed by Dr. Reuben Abati, his special adviser on media and publicity, President Jonathan thanked old and returning members of the party for working together to ensure the victory. He also advised the governor-elect to ensure the reward of the people of Kebbi with good governance and rapid statewide development.

“The President assures Alhaji Dakingari that the efforts of his incoming administration to continuously improve the living conditions of the people of Kebbi State will receive all possible support and assistance from the federal government,” the statement pledged. “President Jonathan also commends voters in Kebbi State, the Independent National Electoral Commission (INEC) and its personnel, as well as national security agencies for playing their parts in ensuring that the re-run election ordered by the Supreme Court was peacefully and successfully conducted.”

Also congratulating Dakingari on Sunday was the national chairman of the party, Alhaji Bamanga Turkur, who described the victory as “well-deserved.”

In a statement signed by PDP’s national publicity secretary, Chief Olisa Metuh, Tukur said that the victory was recorded as a result of the well-articulated vision and sustained programmes of the party, which the newly elected governor has been implementing since 2007.

“Our national chairman, Dr. Turkur, throughout his campaign and subsequent election, has been harping on the imperative of credible performance for all elected officials on the platform of our great Party at all tiers,” the statement noted, adding that “it is the only criterion that commends us to the generality of Nigerians.”

Meanwhile, the Congress for Progressive Change (CPC), in a move so uncharacteristic of election losers, has accepted defeat, blaming it on intra-party crisis.

“The CPC has no problem with the result and shall not contest it in any court,” its party secretary in Kebbi, Alhaji Bashir Matawalle, said on Sunday. “The controversy over CPC’s withdrawal from Saturday’s governorship re-run election should not be blamed on INEC; the the CPC did not put its house in order.”

However, the candidate of the All Nigeria Peoples Congress (ANPP), Alhaji Suleiman Agungu, branded the election a “sham.”

“Going by the low turnout of voters, the general apathy to the exercise and the lopsided nature of the results, it is clear that the election did not meet expected standards,” he said.