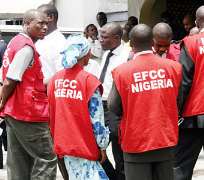 However, the prosecution counsel, G.K.Latona asked the court for a date for the commencement of trial. The defence counsel, Odu Hycinth pleaded with the court that the accused be remanded in EFCC custody, allegedly that she suffered multiple complications due to the series of Operations she had last year.

Justice Olabisi Akinlade ordered that Emeh be remanded at the Kirikiri prison while adjourning that case to May 23, 2012.

Emeh’s road to prison began when Natuhab Consultant Limited was given a N200, 481,894.00 (Two million Four Hundred and Eighty one Thousand Eight Hundred and Ninety Four naira) contract by the Nigeria Army to construct multiple housing units in Abuja.

41-year old Emeh who is an ex- staff of Natuhab Consultants Limited and was working with one Dunnel World Wide Limited a company she claimed is owned by her husband. Based on a relationship between her and Uchechi Kennedy (Managing Director of Natuhab consultants limited) she was contracted to supervise the construction of the multiple housing units in Abuja.

Series of payments were made by Natuhab consultants Limited into Emeh’s accounts upon her request, to facilitate the completion of the project. The sum of N131, 078,142.00 was transferred into her personal account. However, when Natuhab consultants Limited inspected the project, it was discovered that she only spent N86, 045,000.00 out of the total sum of N131, 078,142.00 that she received while diverting and converting the balance of N45, 033,894.00 for her personal use. All efforts to recover the money from her failed.