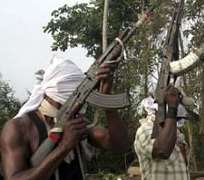 BORNO, March 28, (THEWILL) - An Inspector of Police was on Wednesday evening shot dead at one of the popular markets in Maiduguri while shopping.

His name was yet unascertained as at time of going to press.

The police officer was buying foodstuff at Gamboru market at about 4pm, when he was attacked by a man believed to belong to Boko Haram, who had been trailing him all day.

His assailant reportedly drew his gun from his flowing gown and repeatedly ran bullets on him. He died immediately.

Spokesman of the Borno State Police Command, Mr. Samuel Tizhe, who confirmed the occurrence, said that the murdered inspector was attached to the ‘C’ OPS Department of the Command.