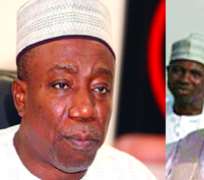 •Aliero & •Dakingari
The governorship re-run in Kebbi State which is scheduled to hold on Friday, March 31, 2012 looks like a concluded issue with all the major stakeholders and gladiators closing ranks. LUKMAN OLABIYI and CHINELO OBOGO x-ray the issues, the intrigues and the politics.

This development has given a new dimension to the intrigues and power play in Kebbi State politics. However, this does not come as a surprise to people who are familiar with the state and its politics, most especially, those who know the political history of Senator Aliero, right from his era as a governor of the state to the time he defected from, All Nigerian People Party (ANPP) to People Democratic Party (PDP) and later to the Congress for Progressive Change (CPC).

The present political scenario in the state has attracted attention across the country, as preparation for the re-run governorship election that will hold on March 31 is in top gear.

The fresh election that is coming up in the state is as a result of the Supreme Court's verdict of February 24, 2012 which nullified the election of the Kebbi State 's Peoples Democratic Party (PDP) candidate in the April 2011 gubernatorial election, Alhaji Dakingari.

From 1999 till 2007, Aliero was at the helm of affairs of the state. Towards the end of his tenure as the governor of the state, precisely in 2006, Aliero's ANPP caved into the PDP, leaving the ANPP in dire straits and clutching the shadow of its past glory in the state. That mass defection of ANPP members to the PDP re-configured the structure and colour of politics in the state. Again, when Senator Aliero defected with his followers to the CPC, PDP also felt the bitter pills of Aliero's politics .

Before finally defecting to the PDP, Aliero was believed to be the major financier of CPC in Kebbi State, including the litigation filed by the governorship candidate of the party against Dakingari, a development that is said to have severed his relationship with former President Olusegun Obasanjo.

Obasanjo had in the past made several attempts towards reconciling Aliero and Dakingari, as the two parties had had cause to hold reconciliatory meetings at the Abeokuta, Ogun State home of the former president

With the return of Aliero and his followers to the PDP, the chances of the candidate of the Peoples Democratic Party (PDP), Alhaji Dakingari, may have brightened.

Aliero, announced his defection to the PDP at the formal flagging off of the PDP gubernatorial candidate's re-run election campaign on March 22, in Birnin-Kebbi.

At the occasion, he painted the picture of what led to his decision to dump the ruling party and what again influence his decision to return to the party with his followers.

His words: 'As you can recall, in 2007 I midwifed the merger of ANPP and PDP which was responsible for the formation of government by PDP in Kebbi State. Unfortunately, because of certain reasons, after about two or three years we started having problems and we decided to part ways with government then.

'After the intervention of well-meaning Nigerians, including President Jonathan, former president Chief Olusegun Obasanjo and Vice President Namadi Sambo; we were persuaded to come back to PDP. And with this all our supporters right from the ward level to the state level have now decided to decamp to PDP'.

Among those that defected with the former governor were the 2011 gubernatorial candidate of the CPC, Abubakar Malam; and his Action Congress of Nigeria (ACN) counterpart, Kabiru Turaki, (SAN).

With this current scenario in the state's politics, it is very sure that the forthcoming election in the state will have neither glamour, nor intrigues as all the major political gladiators in the state have declared their interest to work for common purpose which is to deliver the state to PDP.

For Dakingari, the acclaimed political son of Aliero, the coast is now clear for him once again, to be at the helm of affairs of the state with the support of all the major stakeholders and political gladiators.

He has proved that his more than four years at the helm of affairs of the state was not just as a figure head leader, but an influential one who has everything under his perfect control. Again, it shows that his earlier victory was not just a fluke but dividend of his hard work, leadership style and his imposing credentials in the state.

Many years ago, Aliero, Dakingari and Abubakar were closed friends, colleagues in the Nigerian customs service and political associates.