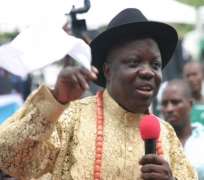 In a congratulatory message to the Chairman, issued by the Chief Press Secretary, Mr. Sunny Ogefere, the Governor said that the party would be better off in terms of unity, peace and strength if party structure was not sidelined in the affairs of the party.

In particular, he said that the existing peace and unity in the Delta State chapter of PDP can be sustained if the national leadership of the party uses the State structure of the party to relate with members in the State.

Accordingly, he enjoined the national leadership to work in harmony with the State leadership of the party to bring cohesion and development to the members and the State, saying “I enjoin you to work with the party hierarchy in the State for the good of all”.

Dr Uduaghan congratulated Tukur and other members of the national leadership on their election, noting that the new national chairman has the experience, the clout and the administrative/political acumen to take the party to a greater height.

He wished the new party executive well and success in office.