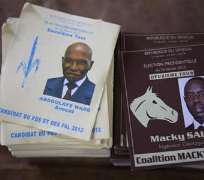 The vote in the usually peaceful nation is a test for democracy in West Africa where polls have been marred by fraud and bloodshed and where a military coup toppled the government of Mali last week.

"I hope that, like during the first round, the Senegalese will show the world that they know how to vote," said Ahrouna Ndiaye, 32, after lining up to vote in a school in the dusty capital Dakar. "And I hope the best candidate wins."

Wade, 85, fell short of a majority in the February 26 first round vote with 34.8 percent, with Sall placing second with 26.6 percent. The other first-round opposition candidates have now united behind Sall against Wade, bolstering his chances.

Both candidates have said they cannot envisage defeat in the run-off, paving the way for a possible dispute when results come in on Monday or Tuesday, and a possible resumption of street protests. There are more than five million registered voters.

Regional bloc ECOWAS's observer mission in Senegal urged voters to remain peaceful on Sunday, saying the election will "mark a further step toward consolidating the democratic gains and political stability of the country".

At least six people were killed in protests over Wade's candidacy before the first round but the runup to the second-round was peaceful.

Opposition activists say Wade's bid for a third term is unconstitutional and some voters see him as yet another example of a long-serving African leader seeking to hang on to power.

A top legal body, however, has upheld his bid after the incumbent leader argued his first term should not count because it began before a two-term limit was adopted. And his supporters say he deserves more time in office.

"We must let him who started his work continue with it," Yaye Fatou Diop, said a 25-year-old communications worker voting in a Dakar suburb. "I am for progress. He has done a good job, he has done the best he can do."

Wade hopes to extend his 12-year-rule by wooing those who did not vote in February and by courting religious leaders who wield a strong influence in the majority Muslim country.

DISPUTED RESULTS?
Sall's manifesto includes a revamp of Senegal's outage-prone energy sector and renewed efforts to end a simmering rebellion in the southern Casamance region, once a tourist hotspot.

Sall, 50, also hopes to lure voters with a promise to cut taxes on basics such as rice in a country where rising food prices mean some households spend half their income to ensure a daily communal bowl of rice and sauce.

Senegal is the only nation in mainland West Africa without a coup since independence, but an army uprising that toppled the government of neighbouring Mali last week has raised security fears.

Poverty and mass unemployment are the main grievances among voters. Wade, who came to power in 2000, argues that he has done more than the rival Socialists did in the 40 years they ruled since independence from France in 1960.

"Poverty has been wiped out of Senegal, but I do not deny that there are some pockets in major cities. I'll take care of it after the elections," Wade said during his last campaign rally in Dakar on Friday.

Reflecting investor concerns, Samir Gadio, London-based emerging markets analyst at Standard Bank, said the market had been negative on Senegal's $500 million Eurobond before the first round vote due to the deteriorating political and security climate.

"The smooth electoral process since and the possibility of an orderly transition in coming days would boost Senegal's historical reputation of political stability," Gadio said in a note. "The main stress point is obviously whether both parties will immediately accept the outcome of Sunday's contest."