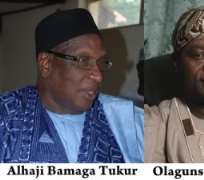 Rufai Alkali
President Goodluck Jonathan and the national leadership of the Peoples Democratic Party have put in place the machinery to ensure the success of Alhaji Bamaga Tukur as the party's National Chairman in Saturday's convention in Abuja.

It was learnt that Jonathan and his men were not deterred by the outcome of the North-East regional election, which saw their preferred candidate for the post losing to Dr. Musa Babayo, the party's acting national secretary.

Rufai Alkali
A Presidency source however described the outcome of the election as rebellion, which should be addressed.

Tukur, who is believed to have the backing of the President, was defeated by Babayo, who polled 14 votes to Tukur's two.

A leader of the party, who spoke on the condition of anonymity, said that it was the prevailing belief in political circles that Jonathan would be seen to be a weak President if the consensus candidate of the PDP was allowed to suffer rejection at the poll on Saturday (today).

A source said that the President was surprised at the action of the North-East governors after an agreement was reached in a meeting he had with them at the Presidential Villa, Abuja, to support his candidate.

The source, who is close to the Presidency, said that the governors agreed after the President acceded to the request that the demand of the senators for inclusion in the National Executive Committee of the PDP be shifted to 2015.

SATURDAY PUNCH investigation showed that the President, who was disturbed by Tukur's rejection in the North-East, was making moves to prevail on other zones to ensure the election of the business mogul at today's convention.

The Presidency source explained that the outcome of the North-East zonal election, which saw Babayo as the candidate for the zone, was the manifestation of a division within the ranks of the PDP governors.

The source explained that the PDP governors were opposed to the demand by the governors of the North-East to present a consensus candidate for the zone since the position was zoned to them.

'I think this thing happened because there was a disagreement between the governors on how the national chairman should emerge from the zone.

'While a larger number of governors said that the chairman should come from the zone and be elected by all, they were opposed by the governors of the North-East, who insisted that they should be the one to produce a consensus candidate for the party,' the source said.

He explained that the PDP's insistence that there must be an election at the convention was one of the party's reactions to what happened in the North-East.

But in spite of the setback in the North-East, it was gathered that the PDP was sure of victory for Tukur, its consensus chairmanship candidate.

The party's optimism, which is shared by the Presidency, was based on the picture that emerged from other zonal congresses and Jonathan's contact with some governors on Thursday night.

The source said that the President, who was billed to travel to South Korea for an official assignment on the day of the election, would only leave the expected instruction with his political team to ensure the emergence of Tukur.

The source said that Jonathan and those pushing for Tukur were banking on the fact that the North-East governors, some of who had indicated interest in the Presidency in 2015, would be careful in antagonising the President.

It was gathered that the party believed that if Tukur was able to win all the votes from the South, North-Central and North-West, his victory would be a foregone conclusion.

It was learnt that in the North-West, Vice-President Namadi Sambo; Katsina State Governor, Ibrahim Shema and his Kaduna counterpart, Patrick Yakowa, were leading others to mobilise support for Tukur.

A member of the party's outgoing National Working Committee, told one of our correspondents in confidence, 'Don't be deceived by what happened in the North-East.

'The defeat of Tukur does not mean that he has been rejected by the North. The result in the North-East was a reflection of the belief of some governors in the zone. They cannot force other zones to dump Tukur.'

In the South-West, investigations showed that at the zonal meeting in Osogbo, the Osun State capital, PDP chiefs, led by former President Olusegun Obasanjo, decided to vote for Tukur.

A reliable source at the meeting told one of our correspondents that the zone would overwhelmingly vote for Tukur.

He said, 'You know the South-West always moves in the same direction. Tukur's opponents won't get a vote in this zone.'

Our correspondents learnt that the members decided to forget their differences and support Olagunsoye Oyinlola, a former governor of Osun State, who was tipped for the position of secretary.

The source, who earlier informed of the zone's backing for Tukur, said, 'The zone's U-turn on Oyinlola is based on the fact that he has been a loyal member of the party and he is close to Obasanjo.

'You will recall that the zone had earlier decided not to support any former governor. But we are supporting Oyinlola because he is reliable.'

In the North-Central, investigations showed that Senate President David Mark and the Niger State Governor, Babangida Aliyu, at the zonal meeting, appealed to the zone to support Tukur.

The Presidency source said, 'Tukur will win overwhelmingly in Niger, Nasarawa, Plateau, Benue, Kwara and Kogi. North-Central is not part of the North-East rebellion.'

At a meeting held in Port Harcourt on Thursday, it was learnt that the South-South PDP chiefs, including a member of the party's Board of Trustees, Chief Tony Anenih, vowed to ensure Tukur's victory.

A party chief, who pleaded anonymity, said, 'You know defeat for Tukur is also defeat for Jonathan, who is our son.  We will not like our son to be disgraced.'

It was gathered that South-East PDP at its zonal congress told its members to vote for Tukur. The zone, investigations showed, decided to monitor its members who would participate in today's convention.

Investigations showed that influential politicians such as a former Vice-President, Atiku Abubakar, were against Tukur's election because of the political calculation towards the 2015 elections.

The source said that it was not a favourable political calculation for the national chairman of the party to come from the same zone with a politician with a presidential ambition.

The source added that the Turaki Adamawa, who opposed Jonathan's emergence fiercely in the last election, and who had been worming his way into the President's heart, would not want to spoil his relationship with Jonathan.

It was learnt that the President and other PDP chiefs were counting on the influence of Mark and a former governor of Kwara, Olusola Saraki, in the North-Central.