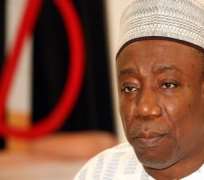 KEBBI, March 22, (THEWILL) – Former Minister of the Federal Capital Territory and ex senator of the federal republic, Senator Adamu Aliero alongside several others in the Congress for Progressive Change (CPC) and Action Congress of Nigeria have returned to the Peoples Democratic Party (PDP).

The erstwhile party men were received by President Goodluck Jonathan and former President Olusegun Obasanjo on Thursday as they flagged off the governorship campaign of Saidu Usman Dakingari, the Governorship candidate of the PDP in Kebbi State.

The President commended the Adamu Aliero political family for returning to the party saying that with the development, the PDP would have an easy win at the poll slated for March 31, 2012.

THEWILL recalls that Aliero, also a former governor of the state, unsuccessfully ran for a senatorial seat in the last election on the platform of the CPC.

He led the guber candidate of the CPC, Abubakar Mallam and that of the Action Congress of Nigeria (ACN) in the last poll, Mr. Kabiru Turaki (SAN) back to the PDP.

THEWILL’s sources in PDP said it was former President Olusegun Obasanjo that brokered Aliero’s return to the PDP.

Addressing Aliero and his supporters at the Kangiwa Square, former President Olusegun Obasanjo, who also doubles as Chairman of the PDP’s Board of Trustees hailed Aliero for his prowess in politics and charged his supporters to vote en masse for Dakingari.

“I am appealing to you all to support our candidate and vote for him overwhelmingly during the election,” he said.

Responding, the former governor also commended the former president for the role he played in bringing them back to the PDP and assured the Obasanjo of their support for Dakingari.

Recall that the Supreme Court a few weeks ago annulled the April 2011 governorship election for Kebbi State after INEC had declared Dakingari winner. The apex court directed the electoral commission to conduct a fresh poll.