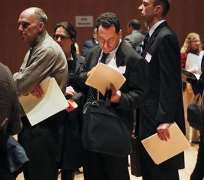 Initial claims for state unemployment benefits fell 5,000 to a seasonally adjusted 348,000, the lowest level since February 2008, the Labor Department said on Thursday.

The prior week's figure was revised up to 353,000 from the previously reported 351,000. Economists polled by Reuters had forecast claims rising to 354,000 last week.

"That's another indication that the labor market is healing. That's good news for the March payroll report," said Gus Faucher, a senior economist at PNC Financial Services in Pittsburgh.

"We are looking at net job growth of 200,000, which will be another good month. On the labor front, we have dug a deep hole but we seem to be digging out of it."

Employers added 227,000 jobs to their payrolls in February, taking the tally for the past three months to 734,000. The unemployment rate currently is at 8.3 percent, having dropped 0.8 percentage point since August.

The Federal Reserve has said it expects the jobless rate to "gradually" decline.

U.S. Treasury debt prices fell on the data and the dollar extended gains against the euro. U.S. stock index futures held their losses as investors worried about slowing growth in China.

A Labor Department official said there was nothing unusual in the state-level data and that only two states - Alaska and Minnesota - had been estimated.

The department next week will introduce new seasonal factors for 2012 and revisions for claims data from 2007 through 2011.

The number of people still receiving benefits under regular state programs after an initial week of aid fell 9,000 to 3.35 million in the week ended March 10, the lowest since August 2008.

Despite the improving labor market picture, long-term unemployment remains a major problem and about 43 percent of the 12.8 million out of work Americans in February had been jobless for more than six months.

The number of Americans on emergency unemployment benefits dropped 24,312 to 2.85 million in the week ended March 3, the latest week for which data is available.

A total of 7.28 million people were claiming unemployment benefits during that period under all programs, down 142,499 from the prior week.