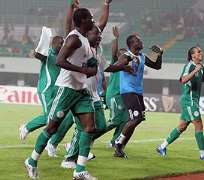 ABUJA, March 21, (THEWILL) - The Senate committee on Sports and Social Development on Tuesday announced it will commence a probe into the steady decline of Nigerian football and sports generally next week.

According to the chairman of the committee, Ahmed Adamu Gumba, the probe will begin on March 26 and 27, and all sports stakeholders are expected to write memoranda and submit or present to the committee on how to resuscitate sports generally with particular reference to football

He also noted that the probe will attempt to unravel what led to Nigeria's fall from fifth position in 1994 to fifty sixth position in the Federation of International Football Association, FIFA, ranking.

He also said the probe will help give direction on how to generate interest in sports at the grassroots level.

On the lingering tussle between the NFF and NFA, Gambu stated that his committee has drafted a bill to the Senate for the repeal of the Nigerian Football Association, NFA, Act wherein it will read Nigerian Football Federation, NFF, adding that until the Act is repealed, the law recognizes NFA.

He however said both factions have indicated their willingness to withdraw their cases in court.

“Nigeria, is going backward in all sporting activities particularly Nigerian Football where we have performed excellently well in the past and as last year, we had been pushed down the ladder from no 5 in 1994 to number 56 last year and yesterday, the chairman of the Nigerian football Association said at the House public hearing that we are now number 57. I was worried by this development that I sponsored a motion to brief the Senate.

“The purpose of the public hearing is to invite all sports loving Nigerians to write memoranda and submit or present to the committee on how to resuscitate sports generally with particular reference to football. They can write on football, hockey, or basketball or boxing. It is our belief that Nigerians should wake up and improve in all these sporting activities so that we can regain our position in the committee of nations," the lawmaker added.