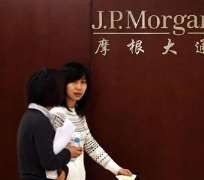 Bridge Trust is based in Zhengzhou and is majority owned by a state-controlled company China Power Investment Financial Co, the Journal said.

It did not mention the value of the acquisition.
The deal requires approval from the China Banking Regulatory Commission, which is expected in the second quarter, the paper said.

Foreign investment in China's trust companies is limited to 20 percent.

In a separate report, the Financial Times said JPMorgan plans to help Bridge Trust originate, structure and distribute products that will be sold to the firm's growing base of wealthy individuals.

JPMorgan declined to comment to Reuters on the media reports.