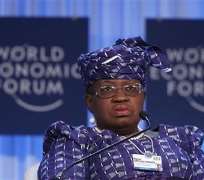 The candidacies of Okonjo-Iweala and Ocampo, who have credentials as both economists and diplomats and according to sources the respective backing of Brazil and South Africa, pose a challenge to the United States, whose hold on the top post has never been contested.

But with its majority of votes and the expected support of European countries, the United States is still likely to ensure that another American will succeed Robert Zoellick, who plans to step down when his term expires at the end of June.

Washington has held the presidency since the Bank's founding after World War Two, while a European has always led the International Monetary Fund. It has yet to publicly identify a nominee to succeed Zoellick.

The deadline for submitting nominations is Friday, and the Obama administration has said it will name a candidate by then.

All of the World Bank's 187 members nations have committed to a merit-based process to select Zoellick's successor.

Emerging and developing economies have long talked up their desire to break U.S. and European dominance of the Bretton Woods Institutions, but have until now have failed to build a coalition large enough to change the status quo.

Three sources said Ocampo, currently a professor at Columbia University in New York, would be formally nominated by Brazil.

One source said Okonjo-Iweala could be nominated on Wednesday, while two other sources said it would be Friday.

Nominations will be submitted to the 25-member World Bank board, which has said it will decide on the next president within the next month.

Two sources said Okonjo-Iweala's candidacy had the blessing of Nigerian President Goodluck Jonathan, who convinced her to join his cabinet last year to lend more weight to his reform agenda.

"IMPRESSIVE CREDENTIALS"
The decision to nominate Okonjo-Iweala and Ocampo followed weeks of discussions among emerging and developing countries at the World Bank board including China and India.

Two sources said South Africa's director at the World Bank board, Renosi Mokate, who also represents Nigeria and other English-speaking African countries, personally flew to Abuja to consult with Okonjo-Iweala about her nomination.

"The impressive credentials of both Ocampo and Okonjo-Iweala puts tremendous pressure on the White House to come up with a candidate of at least equivalent standing," said Domenico Lombardi, a former World Bank board official now at the Brookings Institution in Washington.

"This signals a big shift and really reflects a game change," Lombardi added. "This is the first time in history we have a truly contested election."

Okonjo-Iweala, who left the World Bank as managing director last year to become Nigeria's finance minister, and Ocampo, a former U.N. under-secretary for economic and social affairs, will join American economist Jeffrey Sachs, who has the backing of a handful of small countries, on the nomination list.

Sources with knowledge of the administration's thinking say Washington has focused on convincing a woman to enter the race, which could go some way to address calls by emerging market nations for change. A woman has never led the bank.

Susan Rice, the U.S. ambassador to the United Nations, was a leading contender, however, it is not clear she wants the job, sources have said. Former adviser to President Barack Obama, Lawrence Summers, has also been short-listed for the job. He has declined to comment.

U.S. Senator John Kerry and PepsiCo's Indian-born CEO Indra Nooyi also made an Obama administration shortlist, according to a source, although Kerry has publicly ruled out the job and Nooyi is no longer in contention, according to another source.

Sachs has said he aims to challenge with his candidacy what he sees as a history of political appointments by the White House and acknowledges he does not have the support of the Obama administration. He was formally nominated by Bhutan and a grouping of developing countries including East Timor, Jordan, Kenya, Namibia and Malaysia.

Lombardi said the test was whether large emerging economies like China would rally support for Ocampo and Okonjo-Iweala, or in the end vote for a U.S. nominee.

The United States has insisted that to keep funding flowing from Congress for the World Bank, it is important to retain the presidency.

It is unclear if big emerging nations such as China and India would support a fellow developing nation candidate.

He Fan, deputy director of the institute of world economics and politics at the Chinese Academy of Social Sciences, a top government think-tank, said he thought Beijing would do so.

But Yi Xianrong, an economist at the same institute, said "the most important thing is to have a capable person with energy and expertise...it doesn't matter whether the candidate is from the United States, Germany or developing countries."

"We need to see whether the candidates' value standards and judgment are in line with the World Bank's goals. We can increase our influence in the World Bank through increases in our voting rights," Yi added.

A senior Indian government source said it didn't "have any favorites, no probables."

With just two days left, India is not planning to change that position. Asked whether India would support a developing world candidate, the source said, "If it comes up we will decide; let's see."